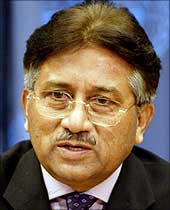 In a frank admission, former Pakistani President Pervez Musharraf has said he made a "mistake" by sacking Chief Justice Iftikhar Mohammed Chaudhry nearly two years back.

"Now, after seeing the incidents following his (the Chief Justice's) dismissal from the office I realised I should not have done that," the ARY News quoted the former military ruler as having said at a lecture at Trinity University in Texas on Thursday.

"It was a mistake to send the reference against him to Supreme Judicial Council, though it was my constitutional and legal obligation. The reference resulted in a chaos in the country... Probably I won't commit such things in future," Musharraf said in the lecture.

"Neither had I any personal enmity with Chaudhry when I removed him nor have I at the moment," Musharraf said adding he was left with no option but to depose the Chief Justice in order to prevent the democratic system of that time.

Chaudhry was removed from the office of the Chief Justice of Pakistan in November 2007 by the then President Musharraf on charges of "misconduct and misuse" of authority.

However, he was reinstated in March this year. Pakistani police had last month booked Musharraf for ordering the house arrest of Chief Justice Chaudhry and other judges he had sacked after imposing an emergency on November 3, 2007, following an Islamabad court's direction on a petition filed by one advocate Mohammad Aslam Ghuman.

The Pakistani Supreme Court had also declared in July that Musharraf's imposition of emergency in November 2007 and the subsequent dismissal of judges were "unconstitutional and illegal".