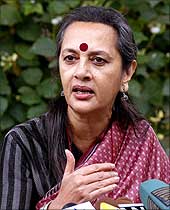 Tamil Nadu Chief Minister M Karunanidhi on Tuesday, ordered a probe into the 'events' relating to visit of Communist Party of India-Marxist politburo member Brinda Karat, MP to a village near Madurai, which was hit by caste clashes last year.

The government had appointed Industry Secretary M F Farooqui as enquiry officer, who has been asked to submit his report within 15 days, an official press release said.

Brinda Karat on Saturday visited Uthapuram village after initially being refused permission by police to proceed there, on the ground that her visit would trigger trouble. Her car was stopped by police on her way to Uthapuram and she was taken to a police station. But they later escorted her to the village after she insisted on going there.

The CPI-M claimed she was arrested. After the CPI-M voiced its protest, Karunanidhi on Sunday had announced that a probe would be conducted into the entire issue related to Karat's visit.

Karunanidhi has sucessful back surgery