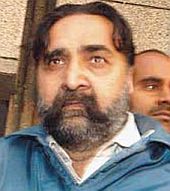 The acquittal of Moninder Singh Pandher by the Allahabad High Court in one of the Nithari serial killing cases on Friday sparked off protests outside the businessman's residence in Noida.

The high court acquitted Pandher but upheld the death sentence of co-accused and his servant Surinder Koli in the rape and murder of 14-year-old Rimpa Halder, one of the victims of the infamous serial killings in Nithari in 2007.

Locals gathered in front of house number D-45 in Sector 31 of Noida soon after the verdict was pronounced and shouted slogans against police and the Central Bureau of Investigation.

Rimpa's mother, Dolly Halder was also among the protestors.

Police have been deployed near Pandher's residence, which is close to Nithari village, to avoid any untoward incidents, a senior police officer said.

The trial court had awarded death sentence to Pandher and Koli for murdering Haldar, who had gone missing from her house on April 27, 2006.

Has justice been done in Nithari killings case?

Nithari serial killings: Pandher acquitted for lack of evidence in one case