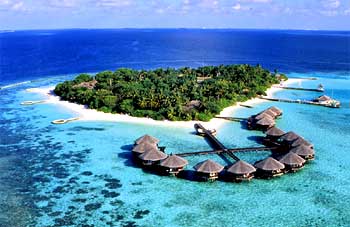 India is responding swiftly to the intended Chinese encroachment in a region it has seen as its traditional sphere of influence.

The Indian Ocean is becoming the latest theatre of Sino-Indian rivalry, with China straining to breach India's old intimacy with island nations like the Maldives and Mauritius and sparking a diplomatic battle between the two countries.

For a change, India is responding swiftly to the intended Chinese encroachment in a region it has seen as its traditional sphere of influence, ramping up engagement on the economic and security front and hoping these new initiatives will deter these countries from cosying up to China.

The Maldives, in fact, is turning out to be India's most exciting new partner in South Asia, with Prime Minister Manmohan Singh inviting Maldivian President Mohammed Nasheed to be the chief guest at a climate change conference India is hosting on October 22-23, so as to get support from small island states like the Maldives in the run-up to the likely bruising battle against the western world at the Copenhagen conference on climate change in December.

Only a few weeks ago, Defence Minister A K Antony travelled to Male to assure Nasheed that India would be happy to supply the Maldivian archipelago with all its defence and security needs, ranging from radars and helicopters to training its small army as well as helping link the hundreds of islands with mobile phone connectivity.

Meanwhile in Mauritius, since Chinese President Hu Jintao ended his four-nation Africa trip in Port Louis in February, India has watched with a mixture of incredulity and admiration the manner in which China is pumping $730 million into the Shanxi Tianli Enterprises business park which will soon be ready to launch a variety of Chinese industries (especially coking coal and iron & steel) in the region.

China wants to use Mauritius' highly developed financial services industry and literate population (per capita income $12,000) as a gateway to Africa. The Shanxi Tianli economic zone  an ambitious project that includes three hotels as well as a 300-bed hospital  is part of Beijing's far-reaching vision that aims at spending $10 billion in several such economic parks all over Africa.

It's clear that officials across the Indian government -- in the ministries of External Affairs, Commerce and Finance -- marvel at the speed as well as abandon with which Beijing has moved to create opportunity and cement its national interest in the Indian Ocean.

"The Chinese are conscious of the fact that in a worldwide recession, their economy is doing so well that they've become bankers to the world. Moreover, the Chinese Communist Party seems to have decided that China should assert itself globally," said a top-level government official on the condition of anonymity.

Officials point out that in Mauritius, India with $1 billion is the second largest investor only second to the UK and that $1 billion annual trade includes the supply of all of Mauritius' petroleum needs. China's trade with Mauritius remains $323 million, although it excludes the $200-million airport expansion as well as several lines of credit.

"India's engagement with Mauritius remains active and vibrant," said one official, pointing out that Mauritian PM Navinchandra Ramgoolam had visited India every year for the last three years.

And although China's spotlight on Mauritius and other countries on the Indian Ocean rim  including its desire to secure berthing facilities and seek enhanced access to ports  is widely believed to be a reflection of its need to continually create new economic opportunities so as to feed its massive manufacturing industry at home, in Mauritius, security-obsessed India has responded by gifting one helicopter to the Mauritian coastal guard.

Meanwhile, New Delhi remains reassured that the 850,000-strong community of Indian origin in Mauritius will continue to play a major role in favourably  tilting the balance, but China, by opening a cultural centre, has put India on notice in this area as well.

"Mauritius has been an old friend of India," an Africa-watcher said on condition of anonymity, adding, "but China is now changing all that."

Back in the Maldives, President Nasheed said his government, while "hugely appreciating the big things" India was sending his country's way -- including a zero-interest $100-million loan to pay salaries upon finding that the Maldivian treasury was nearly empty when elections took place in October 2008, enhancing SBI's loan cap to Rs 820 crore, an Exim bank loan, support at the World Bank for loan facilities to the Maldives, as well as a hydrographic survey to measure the country's continental shelf in dispute with Sri Lanka  "it was the small things, like Indian doctors and teachers working in the Maldives, that matter a great deal to the Maldivians."

As for India's security concerns, Nasheed's government is believed to have assured both Antony as well as India's top strategic triumvirate who visited Male in July  National Security Adviser M K Narayanan, then foreign secretary Shivshanker Menon and then defence secretary Vijay Singh  that the Maldives would be sensitive to India's defence needs.

The strategic triumvirate had pointed out that ever since Rajiv Gandhi's government had sent troops to quell an incipient rebellion against the former dictator Maumoon Abdul Gayoom in 1988, Gayoom had kept Indian interests topmost in mind  even as he crushed human rights at home  irrespective of any passing thoughts of flirting with any of the other major powers.