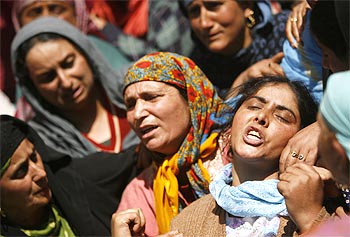 The Jammu and Kashmir government on Tuesday evening formally decided to hand over the Shopian rape and murder case to the Central Bureau of Investigation.

"The state government has formally approached the secretary of the Department of Personnel and Trainings, government of India, New Delhi, along with copies of the FIR and other related documents of the Shopian case, for entrusting it to the CBI for holding an investigation," said an official statement.

The CBI will probe the mysterious deaths of Neelofar Jan, 22, and her sister-in-law Aasiya Jan, 17, whose bodies were found on May 30.

The government's decision comes a day after Chief Minister Omar Abdullah made his first public appearance in Shopian and assured the people of the town that the culprits would be brought to book.

However, the CBI has expressed its reluctance about taking over the case. "We would need the cooperation of witnesses, the help of general public and the relatives of the deceased in the case. In view of this, it will be difficult for the CBI to take over investigations. The CBI has conveyed its views to the state government," spokesman Harsh Bahal had said earlier.

Meanwhile, Shopian remained tense on Wednesday, in the wake of the recovery of the body of Mohammad Hussain Zargar, an activist of the local action committee.

Zargar, 42, had gone missing last Saturday. His body was discovered on Tuesday evening in an orchard by the local police, who immediately took it to the local hospital and surrounded the area.

Protestors demanded that the guilty should be identified and punished. A complete shutdown was observed in the town today against the alleged murder of Zargar.

A team of doctors from the government medical college and forensic experts conducted Zargar's autopsy and his body was later handed over to his relatives for the funeral.

Image: Kashmiri women try to console a crying relative of Mohammad Hussain Zargar, a member of Majlis-e-Mashawarat, a local committee spearheading protests over the rape and murder of two women, in Shopian | Photograph: Fayaz Kabli/Reuters

Police clash with protestors in Shopian