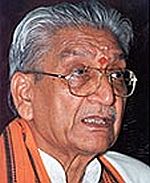 The Bharatiya Janata Party lost the Lok Sabha polls as it failed to protect the interests of Hindus, a senior Vishwa Hindu Parishad leader said on Wednesday.

"BJP lost as it did not protect interests of Hindus. People rejected the party for that reason," VHP leader Ashok Singhal told mediapersons in Mumbai.

"For saints like us who protect Hindu religion, BJP is an opposition party," Singhal said.

"There is a need for a party which protects interests of Hindus," he added.

Stating that he had questioned senior BJP leader L K Advani when he organised the Rath Yatra over Ram temple issue, Singhal said, "BJP has no connection with Ram temple issue as whatever was done was done by our 'karsevaks'... they were the ones who broke open the locks."

BJP lost because it did not raise the issue of Hindutva during the Lok Sabha elections, the VHP leader said.

Singhal described as "fake" the commission which has said the Ishrat Jahan encounter was fake. Gujarat government has received flak from the enquiry commission constituted to investigate the 2004 encounter of five people including Ishrat Jahan, who hailed from neighbouring Thane district.

The VHP leader also said that Pakistan founder Md Ali Jinnah was responsible for the partition of the country, along with Lord Mountbatten.