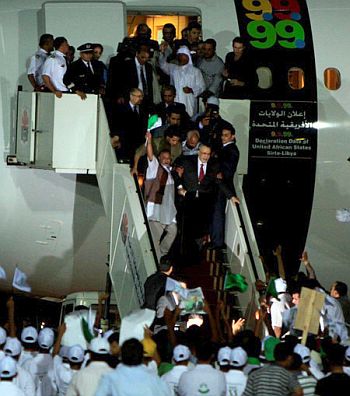 Britain, Scotland and Libya connived to free the Lockerbie bomber responsible for the death of 270 people, a media report claimed on Sunday, even as such allegations were rejected that the decision to release him was based on medical advice from doctors paid by Tripoli.

Scotland rejected allegations that its decision to free the Lockerbie bomber because he is terminally ill was based on medical advice from doctors paid by Libya.

According to the Sunday Telegraph, 'Medical evidence that helped 57-year-old Megrahi to be released was paid for by the Libyan government, which encouraged three doctors to say he had only three months to live.'

The life expectancy of Megrahi was crucial because, under Scottish rules, prisoners can be freed on compassionate grounds only if they are considered to have this amount of time, or less, to live.

The Scottish and British governments actively assisted Megrahi and his legal team to seek a release on compassionate grounds even though the thrust of talks before July this year had been over his release as part of a Prisoner Transfer Agreement (PTA) between Britain and Libya.

Professor Karol Sikora, one of the three doctors who visited Megrahi, in an interview to the daily said, he had been approached by the Libyans and paid a one-day consultancy fee to draw up a report.

Sikora was initially 'pessimistic' that the experts could say he would survive any less than a year.

But he admitted that the Libyans had encouraged him to conclude that Megrahi had just three months to live following his examination. 'The figure of three months was suggested as being helpful [by the Libyans],' he said.

Quoting senior business sources, the report said Britain was desperate that Megrahi should not die in jail after warnings by Libya in May that if this happened trade deals between the two countries, worth billions of pounds, would be cancelled.

British businessmen were also told that plans to open a London office of the Libyan Investment Authority, a sovereign fund with 83 billion pounds to invest, would be jeopardized if Megrahi died in jail.

Megrahi is suffering from terminal prostate cancer. Two of the three doctors commissioned by the Libyans provided the required three-month estimates, while the third indicated that the prisoner had a short time to live.

This contrasted with findings of doctors in June and July who had concluded that Megrahi had up to 10 months to live, which would have prevented his release.