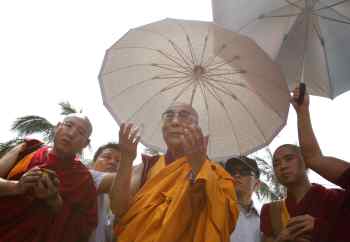 Tibetan spiritual leader Dalai Lama has asserted that Tibet, under his leadership, is not seeking independence from China. The Dalai Lama, who is currently in Taiwan to comfort victims of a recent typhoon that killed more than 500 people, told the CNN in an interview that his position on Tibet is clear and transparent.

"Everybody knows I am not seeking independence. The Chinese government also knows my sort of real thinking," Dalai told the CNN.

"But they accuse -- accusations, for them, is suitable for their basic policy," he said when asked about the Chinese allegation that he is a political troublemaker and even a separatist.

"Sometimes I really feel, as I think many of my friends know, I always am described as a simple Buddhist monk. I always tell other people, my friends, we should be honest, truthful, transparent. So while I am telling other people, I myself must implement these things," he said.

According to CNN, the Dalai Lama said he will not meet with Taiwan's president to avoid politicising the trip.

The importance of the Dalai Lama's Taiwan visit