Bishop gets Gandhi award for public apology to Hindus 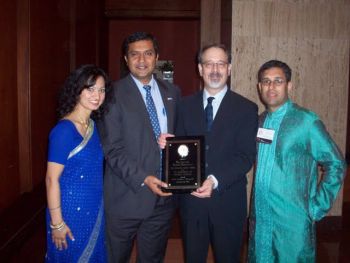 The Reverend J Jon Bruno, Bishop of the Episcopal Diocese of Los Angeles, California, was awarded the Hindu American Foundation's annual Mahatma Gandhi Award for the Advancement of Religious Pluralism at the HAF's Sixth Capitol Hill reception in early October.

Bruno had last year offered a public apology to Hindus "for centuries-old acts of religious discrimination, including attempts to convert them".

In his acceptance letter read out at the event, Bruno again apologised profusely for the centuries-old discrimination against Hindus.

"As Mahatma Gandhi taught, cooperation and trust require a sincere commitment to truth," Bruno said. "Mindful of our duty to the truth, I believe that the world cannot afford for us to repeat the errors of our past, in which we Christians often sought to dominate rather than to serve. In order to take another step in building trust between our two great religious traditions, I renew the apology that I have offered to the Hindu community for the religious and racial discrimination that Christians have directed towards Hindus for far too long."

In her remarks, Guibord spoke of how touched she and her fellow awardees were at the "special and unexpected" recognition. "As the climate in our country becomes less and less civil and more violent in rhetoric and action, the work that we do together and separately becomes ever more urgent and important," she said.

"Now more than ever we, as a community that seeks to protect the integrity of both our religions and our democracy, must stand firm in our collective commitment to eradicate hate, discrimination, defamation and dehumanisation of any and all of God's created."

Also receiving the Mahatma Gandhi Award for the Advancement of Religious Pluralism was the American Jewish Committee represented by Richard Foltin, legislative director and counsel in the AJC's Office of Government and International Affairs in Washington, DC, and Nissim Reuben, programme officer on Indian-Jewish American Relations. The AJC was recognised for its work in building bridges between the Jewish and Hindu communities worldwide.

"At a time of international conflicts in which the name of God is too often invoked as justification, it is hard to think of a time when Gandhi's inspiring message of nonviolence and tolerance has not been more pertinent," Foltin said.

Recalling the various occasions when the AJC and HAF have backed each other when their respective religions were under threat, Foltin said such cooperation is "the lesson that each of our faiths teach us".

US Congressman Frank Pallone, founder of the Congressional Caucus on India and Indian Americans, was presented with a Special Recognition Award for his services to the cause. US Congressman Danny Davis, Illinois Democrat and former chairman of the Congressional Black Caucus, who has taken up the cause of Tamils in Sri Lanka on the urging of Sri Lankan Tamil organisations supported by the HAF, said from his perspective of being an African American, his sympathies lay with the displaced Tamils, and vowed to do whatever he could to help.

The Pride of the Community Award was presented to Anju Bhargava, the only Hindu member of President Obama's Advisory Council on Faith-Based and Neighborhood Partnerships, who said the infrastructure of the Hindu-American community needs to develop further.

Bhargava, the founder/convener of Hindu American Seva Charities, which promotes development and partnership of Seva Centers to provide social services in faith based institutions, said, "One of the things that I am working with as part of the Advisory Council is bringing an awareness of the post-1965 immigrants and especially those of the dharmic tradition -- that our way of being and the way we worship and the way we practice is different from the Judeo-Christian model. So when the government reaches out to the faith-based community and it has a model in its mind, it needs to really look at the other groups that are there and understand the differences in the development."

HAF managing director Suhag Shukla, who emceed the function, said Hindu Americans across the nation increasingly saw the HAF as "a key stakeholder and an institution that reflects their own coming of age".

Earlier in the day, members of the HAF's board of directors and senior staffers had meetings with key US Senators and House members to press for increased scrutiny on aid appropriations for Pakistan. On domestic issues, the HAF backed the demand of other faith-based groups for fairness and compassion in legal immigration legislation, especially as it applies to religious workers, J-1 exchange physicians and widows and widowers of US citizens.

The religious worker Special Immigration program, as well as the J-1 waiver that gives state health agencies the ability to recruit foreign physicians to underserved rural and inner-city communities, are set to expire. The HAF also advocated for an end to the "widow penalty", which places spouses of US citizens who die prior to the end of a two-year conditional period, in deportation.