I'm not a coward, I'll fight back: Uddhav 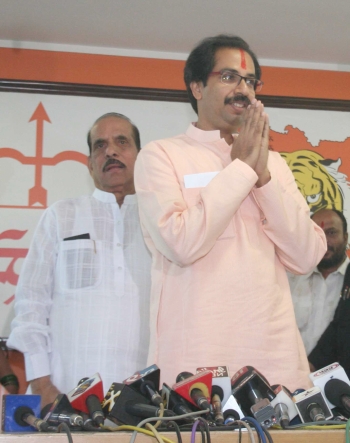 Shiv Sena executive president Uddhav Thackeray was at his aggressive best -- joking, asking rhetorical questions and even roaring at a journalist who kept interrupting him -- while dealing with a barrage of uncharitable questions directed at his style of leadership, during a press conference he addressed at the Shiv Sena Bhavan at Dadar in central Mumbai on Monday.

"I'm not a coward. I'm not dejected by the assembly election results. I will fight back. I'll go back to the people and strike a dialogue with them again. I have committed no crime and I have the guts to go back to the people of Maharashtra and look them in the eye," declared Uddhav, the anointed heir of Shiv Sena supremo Bal Thackeray, while displaying a steely resolve to go back to the grassroots again and take his party back to its glory days.

The pall of gloom that was evident at the party headquarters, as the sun set on October 22 and the adverse assembly election results kept pouring in, was nowhere evident just four days later, as hordes of Shiv Sainiks began to crowd the party headquarters to hear what the Sena's plan of action will be.

"We will again go back to the people," said Thackeray, all grit and determination, while reflecting on the dramatic drop in the number of seats secured by the Sena in the newly-elected legislative assembly.

However, the saffron flag, a symbol of the party's aggression that dominated Mumbai for almost three decades, was starkly missing, leading credence to the allegation that Bal Thackeray's heir is managing the party's affairs like a corporate CEO.

Taking his aggression one step further, the Sena scion thundered that "the factor" (read estranged cousin Raj Thackeray's party Maharashtra Navnirman Sena) which is trying to finish off the party that his father painstakingly built over the last four decades, "will be nowhere in sight after two years, just like the Konkan factor (read Narayan Rane, who left the Sena to join the Congress) is no more a factor in Konkan today."

In his first heart-to-heart conversation with the press after his party received a severe drubbing at the hustings, Thackeray claimed that the election result has steeled his resolve and he will once again go to the people's durbar in the run-up to the 2014 assembly elections.

The Shiv Sena will have to make do with just 44 legislators in a House of 288 members, down from 62 in 2004. Rubbing salt into the party's wounds is the report that the Bhararatiya Janata Party, its hitherto junior alliance partner in the state, which topped the latter's tally with 46 lawmakers, has made a pitch for the position of the Leader of Opposition in Maharashtra.

The previous incumbent, Ramdas Kadam, who lost the prestigious seat of Guhagar -- hotly contested by dissident BJP leader Dr Vinay Natu -- looked forlorn when one of the reporters asked if the Sena executive president would take action against sitting Member of Parliament Anant Gite, who allegedly published letters exhorting the voters to defeat Kadam.

"Thank you for bringing this to our notice. We will find out if this is true and take suitable action," Thackeray shot back. Erstwhile Maharashtra chief minister Manohar Joshi nodded but Kadam looked far from reassured. The defeat seems to have taken the sheen away from him.

Interestingly, Kadam had threatened to quit the party on the eve of the elections if he was denied the Guhagar seat.

While Uddhav answered most of the barbs thrown at him with consummate ease, he lost his cool when one reporter shot a flurry of questions asking him if he were responsible for Kadam's defeat, interrupting him even as he tried to answer the reporter's first question.

"Why are you behaving like a henchman (tumhi supari ghetlyasarkhe ka bolat ahat?)? Let me finish my answer first. Behave like a reporter," Uddhav snapped, proving that he too possesses the mercurial nature exhibited by his father.

When this correspondent asked him about his father's advice to him -- when it became evident that the Shiv Sena-BJP alliance would have to sit in the Opposition benches for the third time in a row -- his laconic repartee was, "Get elected the next time."

While addressing the media, he clearly indicated that the Shiv Sena would not give up despite its electoral debacle, and is in for the long haul.