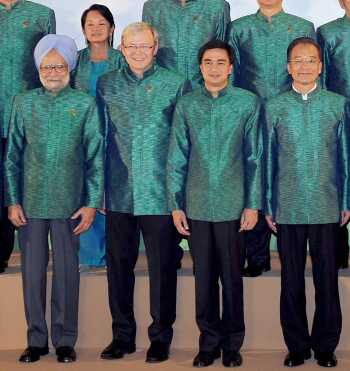 Meeting in the backdrop of recent recriminations, Prime Minister Manmohan Singh and his Chinese counterpart Wen Jiabao on Saturday agreed that bilateral issues should be 'properly handled' through discussions, even as they chose to skirt the controversy over Arunachal Pradesh.

The two leaders underlined the importance of building trust, harmony and better understanding and agreed that neither side should let differences act as impediments to the growth of their relations.

During his hour-long talk with Wen on the sidelines of the ASEAN-India Summit, Dr Singh said both sides should have better understanding at the political level, so that bilateral relations are strengthened.

Wen concurred with Dr Singh that the issues which may arise in the bilateral relationship should be 'properly handled' through discussions and they should not become impediments in the development of friendly ties, said N Ravi, Secretary (East) in the Ministry of External Affairs.

The two leaders did not discuss the issue of Arunachal Pradesh over which the two countries have sparred in the recent past. Chinese state-run news agency Xinhua said the two leaders agreed to make efforts to gradually narrow their differences on border issues.
Dr Singh and Wen agreed to try to ensure peace and stability in the border areas, saying this would be conducive to resolving the border issues and furthering bilateral cooperation, Xinhua reported. The two sides agreed to continue talks with the aim of incrementally removing the barriers to a solution that was fair and acceptable to both sides, the Chinese agency said.

From the Indian side, Ravi only read out a prepared text but did not take any questions from the media. The Chinese premier said it was important that India and China should live in harmony and friendship and enjoy prosperity, Ravi said. Describing Dr Singh as an 'old friend', Wen said it was important to implement the agreements outlined in the 10-pronged strategy of 2006 and the Vision Document of last year to 'deepen mutually beneficial cooperation' on bilateral, regional and international issues.

"We want to have a healthy and steady relationship with India," Wen said and expressed confidence that in the years ahead, the two countries will have good relations. Wen referred to Dr Singh's remark -- that both countries have enough space to develop and cooperate -- and said that "there are sufficient areas in the world for India and China to enhance such cooperation".

The meeting came as the two countries struck conciliatory notes after provocative statements from China on Arunachal Pradesh evoked a strong response from India.

Wen, while felicitating Dr Singh on his re-election, recalled that in the past years, India and China had reached important agreements on developing and strengthening bilateral ties. "This serves the interests of the two countries, the region and the world," he said while stressing the importance of high-level visits to this end.

Terming his meeting with Wen as productive, Dr Singh said it was a 'good discussion' and the two sides agreed to further promote strategic and cooperative partnership. Dr Singh, while reviewing with Wen the bilateral relations in all aspects, said he would like to see the ties move forward in every direction.

He described the bilateral economic and trade relations as 'a vital pillar of our partnership' and referred to the exchanges in the defence field.

Dr Singh noted India's readiness to cooperate with China on global issues like climate change, world trade and the global financial crisis. Both the prime ministers agreed that the partnership between the two countries was in the interest of the region and the whole world.

Wen made a pitch for friendly and cooperative relations to ensure that 'Asian Century' becomes a reality. Xinhua quoted Wen as saying, "We have reached an important consensus on promoting bilateral ties, and I believe that our two countries could maintain a good relationship in the future, which conforms the interests of the two countries and I have confidence about that."

Dr Singh said the Indian side was looking forward to President Pratibha Patil's visit to China next year.

After their much-awaited meeting, Dr Singh and Wen shared the dinner table on Saturday evening, sitting next to each other at a reception hosted for the Asia Pacific leaders.

It is not clear whether it was a well planned strategy to seat the two leaders together at the gala dinner hosted by ASEAN chair Thailand or just a coincidence.

If the purpose was to convey to the rest of the world that India and China are mature neighbours, the message did go across, an official present at the Hotel Holiday Inn said.

The two leaders, who met for the first time after India and China traded jabs over Arunachal Pradesh recently, appeared to share a good chemistry as they dined at the hotel, located on a quiet beach on the Gulf of Thailand.

The meeting between Dr Singh and Wen came in the backdrop of the recent war of words between India and China over Arunachal and other issues like China issuing visas to people from Jammu and Kashmir on loose sheets. India also strongly voiced its objection to Chinese developmental activities in Pakistan-occupied Kashmir.

New Delhi has also made clear its objections to the building of a dam by China on Brahmaputra River. China has also objected to the proposed visit of Tibetan spiritual leader Dalai Lama to Arunachal Pradesh in November.

India, on its part, has rejected the objection and maintained that the Dalai Lama was free to travel anywhere in the country. However, in the last few days, conciliatory tones were heard from both New Delhi and Beijing. Senior functionaries of both the countries said the border issue could be resolved by dialogue.