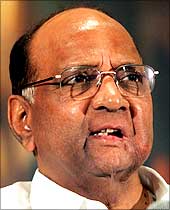 Nationalist Congress Party chief Sharad Pawar on Wednesday steered clear of the statements made by some members of his party, who have demanded that the chief minister's post be shared by the Congress and the NCP on a rotational basis, if the combine comes back to power in Maharashtra.

"Definitely, they (Congress) will have a better number than us. I do not expect that (CM's post)," he told reporters, a day before the counting of votes for the Maharashtra assembly elections.

He was asked whether the NCP would stake claim for the chief minister's post if it won more seats than the Congress.

The NCP chief expressed confidence that the ruling Congress-NCP alliance will secure a majority in the assembly elections. On the exit polls predicting fewer seats for his party, Pawar said, "I don't believe in exit polls. I believe in actual counting. I will wait for it."

NCP leader Chhagan Bhujbal had said on Tuesday that if the ruling combine retained power, the chief minister's post could be shared by the Congress and the NCP, for two-and-a-half years each.

Captain who died in AI plane crash was ex-IAF

'Pained by the plane accident in Kozhikode'

Maharashtra polls: Short, but not sweet