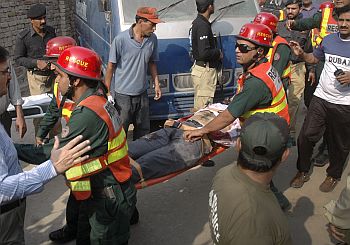 Suspected Taliban militants on Thursday unleashed a fresh wave of terror in Pakistan storming three security facilities in Lahore in near-simultaneous attacks and carried out a suicide bombing at a police station in northwestern Kohat city, leaving at least 41 people dead.

At least 20 people -- 16 security personnel and four civilians -- were killed in attacks on an office of the Federal Investigation Agency and two police training facilities in Lahore by three groups of terrorists between 9.15 am and 9.40 am local time, police said.

Ten of the attackers were gunned down by security forces or blew themselves up. Nearly 40 people were injured in all the attacks.

In Lahore, the terrorists exchanged heavy gunfire with security forces at the FIA office on Temple Road located close to Mall Road, the Elite Force police training centre at Bedian Road which is six kilometers from the airport and the police training facility at Manawan on the outskirts of the city.

Pakistan has witnessed a sudden spurt in terror strikes since May when it launched an offensive against the Taliban in the restive North West Frontier Province.

Pakistani channels reported that Tehrik-e-Taliban Pakistan claimed responsibility for the Lahore attacks. Two inspectors and four civilians died in the attack on the FIA office, police officials at the site told PTI.

A terrorist wearing a suicide jacket was gunned down by security forces. Among the civilians who were killed was a banker. The dead terrorist was also carrying packets of dates and dry fruits.

Security officials said this indicated he probably planned to take hostages and hole up in the building. Guards deployed at the gate stopped the attacker before he could enter the FIA office.

Security forces evacuated the office and nearby buildings and launched a search for three more terrorists believed to be in the area, said SP (Investigation) Haider Ashraf.

The terrorists who attacked the police training centres at Bedian Road and Manawan lobbed several grenades and traded fire with policemen and paramilitary Pakistan Rangers troops that surrounded the facilities.

SSP (Operations) Chaudhry Shafiq Ahmad said seven policemen and four terrorists were killed at the Manawan facility. One of the terrorists wearing a suicide jacket blew up when he was shot by policemen while another detonated his explosives.

At the Bedian Road facility, army commandos gunned down all five terrorists involved in the attack, Lt Gen Shafqat Ahmad told reporters. The terrorists entered the facility by scaling a wall but were spotted by guards. Some of the attackers blew themselves up.

Seven security personnel were also killed in the attack. Several loud explosions were heard from within the Bedian Road centre. "They (terrorists) all seem to be young boys aged between 18 and 20. Three of them wearing suicide jackets blew themselves up," Ahmad said.

Lahore Police Commissioner Khusro Pervez said the terrorists were heavily-armed and carried explosives. He said army commandos were called in to end the terrorist siege at Bedian Road. Dozens of ambulances rushed to the sites of the attacks to take the dead and injured to hospital.

"The situation in under control and there is no need for any panic reaction," Interior Minister Rehman Malik said. "The perpetrators are carrying out an agenda. The handlers behind the attacks do not want peace," he said.

Malik said all the four provinces have been put on red alert and security beefed up at all the key installations. The FIA office attacked this morning is located next to another building of the same agency that was targeted by a suicide car bomber on March 11 last year. That attack had killed 24 people and injured scores. The building targeted last year is currently empty as it was very badly damaged.

In March this year, terrorists had stormed the police training centre at Manawan, killing eight policemen and injuring 90 others. Today's attack was also part of a new trend of terrorists storming the facilities of security agencies.

Last week, a group of terrorists attempted to storm the Pakistan Army's General Headquarters in Rawalpindi. Nine attackers and 14 security personnel and civilian employees of the armed forces died in the assault.

Photograph: Rescue workers carry the body of a man killed during an attack on the Federal Investigation Agency in Lahore on Thursday