Arctic to be ice-free in summer in 20 years, say scientists 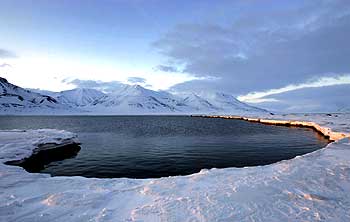 The Arctic may be ice-free during summer within the next 20 years, claims a new research by the Polar Ocean Physics Group from Cambridge University.

The researchers arrived at this conclusion after comparing the measurements of ice thickness recorded by HMS Tireless, a Royal Navy nuclear submarine, with those taken two years later in the same area by explorer Pen Hadow, according to a report by timesonline.com.

The study proved that the findings of the submarine in 2007 were accurate and confirmed that sea ice was eroding at an increasing pace.

"The North Pole will be exposed in ten years. The change in the Arctic summer sea ice is the biggest impact global warming is having on the physical appearance of the planet," timesonline.com quoted Peter Wadhams, Professor of Ocean Physics at Cambridge, as saying.

Recently, a BBC report claimed that the Arctic could be ice free in just the next 5-6 years.

This year, the ice cover shrunk to 4.13 million sq km in the summer, the smallest ever in recent times.

An ice-free North Pole may be bad news for environmentalists but it is definitely good news for shipping companies.

Earlier, the passage of ships would be blocked by ice throughout the year, and the ships had to use special ice-breaking vessels to make their way from the Pacific to the Atlantic, says the report.

Now, ships will be able to sail through the ice-free Arctic in the summers. Ships traveling to Europe from the East would be able to save on journeying over 3000 miles to avoid the icy Arctic.

However, the report quotes Martin Summerkorn, climate change adviser to the World Wildlife Fund's Arctic Programme, warning that the melting sea ice will have dire consequences.

The Arctic Ocean will warm rapidly due to the lack of ice to reflect sunlight, and the warm Arctic water will accelerate the melting of the Greenland ice sheet, which in turn will contribute to the rising sea level, he explains.

Summerkorn warns that rising sea levels could result in floods which would affect "one quarter of the world's population and cause extreme global weather changes," according to the timesonline.com.

BBC's Richard Watson on his 26/11 investigation