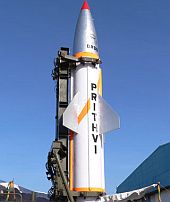 India on Monday successfully test fired in quick succession two nuclear-capable Prithvi-II surface-to-surface ballistic missiles with a range of 350 km from the Integrated Test Range (ITR) at Chandipur, about 15 km from Balasore in Orissa.

The two indigenously developed missiles were test fired successfully at 10:28 am and 10: 33 am, from mobile launchers as part of user trials by the army, defence sources said.

The trajectories of the missiles were tracked by a battery of long-range, multi-function radars and electro-optic telemetry stations at different locations for post-launch analysis, the sources said.

Scientists of the Defence Research Development Organisation (DRDO) supervised the test firing with logistic support from the ITR personnel here. Naval ships were anchored near the impact points in the Bay of Bengal.

The nuclear-capable Prithvi-II missile has already been inducted by the armed forces and is handled by the army units attached to the strategic force command's special group, they said.

According to Defence Research and Development Organisation sources, the tests were part of the user trials, which was conducted by a special contingent raised by the Army.

The missile, which is about nine metres in length and one metre in width, can carry conventional as well as nuclear warheads and has a range of 350 kilometres. It is one of five missiles being developed under Integrated Missile Development Programme.

Prithvi-II is capable of carrying a payload of between 500 kg and one tonne, including nuclear weapons.