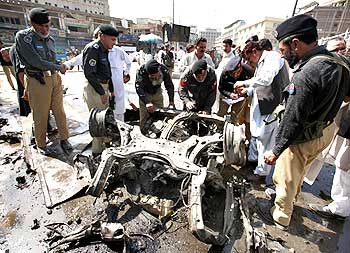 At least 50 people were killed and 120 injured when a suspected Taliban suicide bomber detonated his explosives-laden car in a busy Peshawar market, the deadliest attack in six months that pushed Pakistan to vow that army would march into militants' den to flush them out.

The blast, in which the bomber used 50 kg of artillery shells and machine gun bullets, ripped through the Khyber Bazar market around noon when a packed bus was passing the suicide bomber's vehicle.

The explosion left blood-soaked bodies strewn on the road in the famous market of the provincial capital of North West Frontier Province and the bus reduced to a mass of charred and twisted metal.

"The car was moving when the blast occurred, which indicates the presence of a suicide bomber," said Assistant IGP Shafqat Malik of the bomb disposal squad.

Fifty people were killed and 120 wounded in the blast, said Shahib Gul, the deputy medical superintendent at Lady Reading Hospital. A woman and nine children were among the dead. Gul said the death toll could rise as 22 of the injured are in a critical condition.

Interior Minister Rehman Malik told reporters outside Parliament in Islamabad that suicide attacks and bombings by militants are forcing the government to order a crackdown in Waziristan, the main stronghold of the Taliban.

"I believe we have no option except to take action in South Waziristan and North Waziristan," Malik said.

No group claimed responsibility for the blast, but Taliban had recently said they would avenge the slaying of their leader Baitullah Mehsud by carrying out suicide attacks.

Friday's blast was the deadliest attack in Pakistan since a suicide bomber targeted a packed mosque near northwestern town of Jamrud in March, killing about 50.

"We thought (the militants) would return to the right path without operations being launched. Today's attack in Khyber Bazar is compelling the government to advance the date for the operations," Malik said. He warned that there could be more attacks in the coming days.

"It is clear that the country's enemies and the hired killers of the Taliban want to continue their activities to keep their masters happy. In all these activities which we investigated, all roads lead to South Waziristan," he said.

Dramatic footage captured by the close circuit TV camera of a bank in Khyber Bazar showed that the blast occurred at 12.16 pm just as the bus was passing by. It bore the brunt of the blast and most of the people in it were killed or injured.

Bloodied victims ran helter-skelter after the blast. Traders rushed the injured to nearby hospitals. Authorities declared an emergency in hospitals in Peshawar and appealed to people to donate blood for the injured.

Several of the bodies were so badly mutilated and charred that they could not be identified. Dozens of cars and motorcycles were destroyed by the blast. Numerous shops, banks and offices in Khyber Market were badly damaged.

Friday's attack was the second suicide car bombing in Peshawar in less than two weeks. Twelve people were killed when a suicide attacker struck in a commercial hub in the city on September 26.

Bomb disposal squad official Shafqat Malik said 50 kg of high explosives were used in the attack. "There was more damage as artillery shells were also used by the bomber," he said.

NWFP Information Minister Mian Iftikhar Hussain blamed militants for the attack. "We will not bow before the terrorists," he told reporters at the site of the blast. The provincial government had broken the back of terrorists and they are now targeting innocent civilians, Hussain said.

President Asif Ali Zardari and Prime Minister Yousuf Raza Gilani condemned the blast. Gilani ordered an immediate inquiry into the incident and said such attacks cannot deter his government from taking action against extremists. Action against militants will continue till they are completely eliminated, he said.

US Ambassador Anne Patterson too condemned the bombing, saying: "This attack serves only to highlight the vicious and inhuman nature of the terrorists who aim to instil fear in the hearts of the Pakistani people." The US will continue to stand by the Pakistan government in its fight against terrorism, she said.

District administration chief Sahibzada Anis said security agencies had launched an investigation and officials responsible for any security lapses will be punished.