Nobel prize a tribute to our educational system: PM 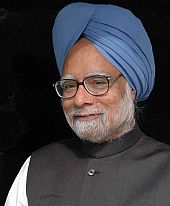 Prime Minister Manmohan Singh on Thursday congratulated scientist Venkatraman Ramakrishnan for winning Nobel prize in Chemistry and said it was a "great pride for India" and a "tribute to the educational system" in the country.

"It is a matter of great pride for India that a brilliant scientist, who has gained the highest international recognition, should have done most of his education in India," Dr Singh said in a message to Ramakrishnan who jointly won this year's Nobel prize for Chemistry.

He said it was a "tribute" to the educational system in the country and the dedication of the teaching community that "we are able to nurture such international excellence in the sciences".

Warmly congratulating the India-born scientist, Singh said "the work that you have done to extend the frontiers of Molecular Biology will be an inspiration to thousands of Indian scientists, researchers and technologists, who strive to follow in your footsteps."

"This high honour is just and due recognition of your exceptional scientific achievements in your chosen field of study", he said, adding that the work done by him and the other prize winners in furthering the scientific understanding of one of life's core processes has major applications in the field of medical science and drug development.