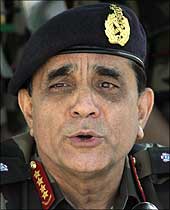 Rubbishing the chances of a repeat of the 1962 Sino-Indian war which China won, Army Chief General Deepak Kapoor on Tuesday said the Army was capable of defending Indian territory and warding off any aggression.

"The Indian Army is capable of looking after and ensuring the defence of the country. It will take care of any aggression against Indian territory," General Kapoor said.

"The charter of the Army is to defend Indian territory at all costs. This talk of a repeat of 1962 is totally incorrect and uncalled for," he said.

Stating that 'offensive action' could not be part of any credible defensive posture, the Army chief added that his force was "sincere to ensure the defence of our country till the last drop of our blood."

The Army, Kapoor said, had the requisite capability to defend the Indian territory even if it means deployment of force multipliers. Strengthening and modernisation of the forces was a dynamic process, he added.

"It is an ongoing process and modernisation of the Army is going on. The Chinese too are modernising the People's Liberation Army. We need to build our capabilities to be able to meet the challenges whenever it appears," he told a TV channel in an interview

On the incursions by Chinese military personnel on the Indian side of the Line of Actual Control between the two countries, Kapoor said the transgressions by the PLA continued to be at the same level as last year.

"In 2009, so far, the number of transgressions have been almost exactly at the same level as during the corresponding period in 2008," he said.

Claiming the Chinese military incursions were not under political orders from Beijing, Kapoor said, "There is no provocation (through incursions) per se. There is nothing to be alarmed about it."

The Army chief said the Chinese have claimed, during Border Personnel Meeting, that Indian Army patrols had entered their side of the LAC.

"Similar charges are made against our patrols," he said. Blaming the non-demarcation of the LAC as a reason for differing perceptions on both sides, Kapoor said these kind of complaints would keep cropping up time and again till the time the demarcation took place.

On the reports of PLA helicopter dropping food cans in Ladakh in June this year, the Army chief said the Chinese claimed the helicopter was flying within their side of the LAC. Kapoor said apart from raising the transgressions at Border Personnel Meetings, the Army had also taken up these issues up through the diplomatic channels.

Talking about China's space capabilities, the Army chief said India too needed to improve its use of space for military applications "to defend ourselves and to our advantage."

Favouring a dedicated military satellite for Indian armed forces, Kapoor said it would not be wise to use foreign nation's satellites, as there were chances of error.

"When we use others' satellites, then the data could be slightly displaced. If it is our own satellite, we are sure the dimensions are correct," he said. "

"We do not have (a dedicated military satellite). But we need to look at space and therefore we need to develop our equipment," he added.

India and China: It was a stab from the front