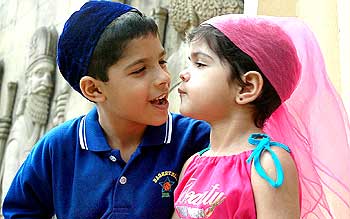 The United Nations Educational, Scientific and Cultural Organisation has added Navruz, the Parsi new year, and Ramman, a religious festival and ritual theatre of Uttarakhand, to its illustrious list of Intangible Cultural Heritage of Humanity.

Sources said UNESCO picked the two from a list of 20 items submitted by the government.

The list now has 180 representations from across the world. Three other recognised events from India are: Ramlila, the traditional performance associated with Dussehra,  Koodtiyattam from Kerala, and the traditional Vedic chanting.

Image: Parsi children greet each other on the occasion of Parsi New year.A file picture.