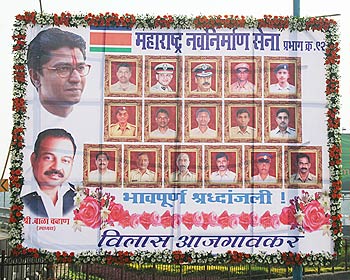 Does heroism have a Marathi manoos hue for the Maharashtra Navnirman Sena, even if the martyrs lost their lives protecting Mumbai?

Both heroes, Bengaluru-based Unnikrishnan and Dehra Dun native Bisht, were honoured with the Ashok Chakra, the country's highest award for valour during peace-time, this Republic Day.

The MNS hoarding has photographs of all the other security personnel killed during the 26/11 attacks.