No compensation for 26/11 cab owners 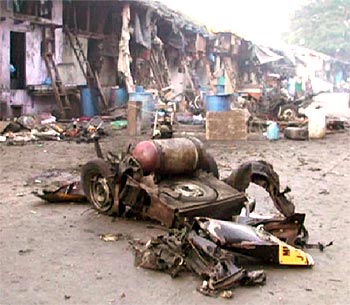 Two taxis were blown up by the terrorists on November 26, 2008. These were the cabs that the terrorists used to travel to their destinations after landing in Mumbai by sea. The terrorists reportedly took taxis to the Taj and Trident hotels and the Chhatrapati Shivaji Terminus railway station.

Why did the third taxi not explode? Or were there only two cabs? No one knows the answers to these questions.

One fact is now known. Both the taxis came to CST after dropping off the terrorists.

Mohammad Ali Habib is the owner of the taxi that exploded at Wadi Bunder, Mazgaon, south Mumbai. He is a mechanic and has four taxis which he rents out to drivers.

Phoolchand Bin, who died in the explosion, had been driving one of Habib's cabs for six years. On that fateful day he had taken charge of the taxi at 6 pm. "He lived in Jogeshwari (northwest Mumbai) and came to Bombay Central station to take the cab. He would go back after midnight by the last train or sleep here and take the first train in the morning," Habib told rediff.com

That night when he did not return, Habib did not think anything was amiss. He discovered the next morning that one of his taxis had been blown up.

Phoolchand's wife lives in a village in Uttar Pradesh. Habib saw to it that she got the compensation of Rs 515,000 from the Maharashtra government. The Uttar Pradesh government also gave her Rs 200,000. The Prime Minister's Relief Fund, which promised Rs 200,000, has not delivered yet.

Habib did not get anything. "I am glad my driver's wife got compensation, but am I not entitled to anything? Isn't it the government's responsibility to protect my cab too? I pay road tax; when I bought the cab, the government earned sales tax. But nothing came to me. I have been running around for succour but have not received even sympathy."

He went to the free legal cell the state government has set up in the Bombay high court. The lawyers there told him to bring his ownership documents, police report, his licences and permit. He handed over everything. He does not know the name of the lawyer who took his petition. Nothing has happened.

Along with the driver two lady passengers also died in the blast.

Habib had paid for third party insurance for his cab. Thus, his driver and passengers are entitled to compensation. He is not. He says the insurance company, United Insurance, must have paid the driver's wife and the relatives of the passengers. He does not know.

Mansoor Sheikh is the owner of the taxi that exploded in Vile Parle, northwest Mumbai. He had owned that taxi since 1995. It was his only cab. His driver Umar took charge of the cab at 8 pm that night. Umar picked up a passenger from CST.

Umar did not call Sheikh that night, but he did call another driver just before he died. He told the driver, "I am going to Borivali (also in north-western Mumbai). I have got a passenger who wants to go there."

Sheikh too gave his lawyer all the demanded documents. "Damn fellow did not do anything," he says.

He also has a grouse against his insurance company, Reliance Insurance. "I have paid the premium for full insurance. First they agreed to pay me. Later they refused and said I was welcome to sue them and get the money in court. You think I have the money to sue Reliance?"

He also curses the government. "They have not paid for my cab. I wanted to see if I could salvage it. I wanted to try and repair it. It's my only cab. But the police have seized it as evidence. Now they will keep it till the case is over. What am I to do?"

Image: The remains of the taxi that exploded at Wadi Bunder. Photograph: Satish Bodas

A Ganesh Nadar in Mumbai