In jail or out, there's no stopping poacher Sanchar Chand 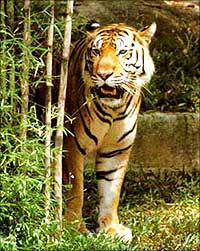 Notorious poacher and wildlife trader Sansar Chand may be in or out of jail, but his illegal trade in tiger and leopard skins and body parts continues to thrive, with his family members and dozens of aides doubling up to fill the vacuum. The Supreme Court let him out on bail in August this year.

Authorities continue to nab his gang members, but without much impact as the smuggling of the wild animals' skins, bones and parts go on unchecked. The latest catch of the Wildlife Crime Control Bureau is Chand's key aide Bheema (38) from Ballabhgarh in Haryana on Tuesday.

Bheema, who was wanted for killing several tigers, including those in the Sariska reserves in Rajasthan, had gone underground after a raid on his house in Gurgaon in July last year led to seizure of tiger bones, body parts and implements for poaching.

The Wildlife Protection Society of India activists are, however, not impressed as they said one or two arrests here and there cannot bust the racket in wildlife smuggling, as various agencies engaged in eliminating it have not yet been able to make a count of all the members of Sansar Chand gang and put them behind bars. Worse is the fact that there are not many convictions, they rued.

Bheema was tracked down by the WCCB from leads provided by seven other poachers nabbed from Nagpur and Delhi earlier this month. He turned out to be their supplier of the skins, bones and other body parts of wild animals.

WCCB officials admit that the arrest of Bheema and a large number of other poachers may still not put an end to poaching and wildlife smuggling, as they are not able to fathom the strength of Sansar Chand's gang -- which is active in nine states, including Rajasthan, Madhya Pradesh, Uttar Pradesh, Maharashtra and Karnataka.

The irreparable damage to India's wildlife by Sansar Chand's gang can be judged from his own admission to the Central Bureau of Investigation in 2006 that he had sold not less than 470 tiger skins and 2130 leopard skins to just four clients in Nepal and Tibet, the officials said.

They point out that his conviction by a Jaipur court in 2004 did not stop his illegal smuggling trade as everyone in his family, including his mother, brother, brother-in-law, sisters, and sisters-in-law, son, nephews, nieces and daughter carried it out with guidance coming from him from inside the jail.

The WPSI was, therefore, dismayed when the Supreme Court suspended  Sansar Chand's jail sentence and ordered him to be enlarged on bail in August. Its worry is that the dismal track record of convictions in wildlife cases and the release of such a notorious master poacher will only lead to the ultimate wiping out of the entire tiger population in the country.