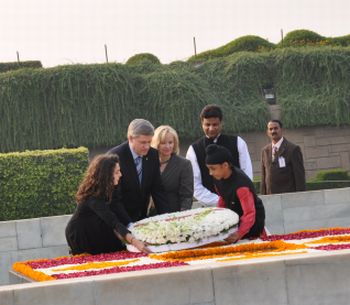 Canadian Prime Minister Stephen Harper and his wife Laureen visited Rajghat in New Delhi, where they laid a wreath on Mahatma Gandhi's memorial.

Two 14-year-olds representing the two countries -- Canadian Jeane STE-Marie and Indian Hartej Singh  carried the wreath from the entrance to the memorial.

'It's a great honor to be here at the memorial for such a great Indian and model for all humanity. Blessed be Gandhi's memory. Peace be on Earth.'

Harper was presented with several books on Gandhi and a life-size copper bust of Gandhi.

Why Harper's India visit is crucial