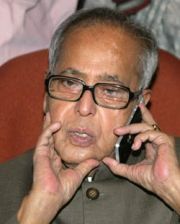 Finance Minister Pranab Mukherjee on Sunday called on Sri Lankan President Mahinda Rajapaksa and discussed with him bilateral relations and the issue of resettlement of the war displaced Tamils.

An official in the president's office described the breakfast meeting here as cordial.

He said Mukherjee discussed with Rajapaksa issues pertaining to global economy during the meeting before proceeding to Kandy, 115 km north east of Colombo.

At Kandy, Mukherjee will visit the Sri Dalada Maligawa temple of the Sacred Tooth Relic before returning to India.

During his meeting with Rajapaksa, Mukherjee discussed the current political situation in the country and issues relating to the internally displaced people in relief camps in the north, the Daily Mirror online reported.

Mukherjee, who delivered the fourth Lakshman Kadirgamar Memorial lecture in Colombo on Saturday said that Sri Lanka should find a political solution for the Tamil issue as a sequel to the victory over the Liberation Tigers of Tamil Eelam, and ensure that every stakeholder gains from the settlement irrespective of religion and ethnicity.

The government has claimed resettlements were taking place every day.

As many as 24 flailing machines were being used for de-mining process, Samarasinghe said, adding that the IDPs were being resettled only after ensuring that de-mining was completed and infrastructure and security was established.

The outgoing chief of defence staff Sarath Fonseka in his resignation letter to the Sri Lankan President, among other things, had said the plight of IDPs was a matter of great concern.

"The plight of the IDPs is also a point of great concern to me... many of them are continuing to live in appalling conditions due to the lack of proper planning on the part of the government," he had said.