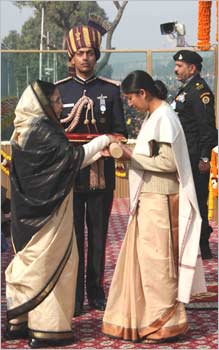 After two long rings, her tentative voice answers the cell phone. "Ji, main Vinita Bisht bol rahi hoon," she says in a tone weighed down by the hesitation of speaking to someone unknown.

It is 8.30 pm, Mumbai has a cyclone alert, while at the other end of the telephone line -- in distant Dehra Dun -- the cataclysmic upheaval in Vinita Bisht's life is still to die down.

"My mind has been at unrest. Confused. Sometime I don't know what all goes through it. My loss cannot be explained, it can be felt. It can be felt by me," her voice comes feebly.

Vinita Bisht's husband was no ordinary man. Gajendra Singh Bisht, 36, a National Security Guard commando, died a hero's death while leading his team to flush terrorists out of Nariman House, the orthodox Jew centre in Mumbai, during the attack on the city from November 26 to 29.

He was awarded India's highest peacetime gallantry award, the Ashok Chakra, on Republic Day. On a cold day in January, a grief stricken Vinita had received the medal from the President in New Delhi.

In a light sari, hair pulled back in a ponytail, she had held back tears while accepting the honour and respectfully touched President Pratibha Patil's feet.

"My husband did his duty. He did what he should have done. I am proud of him. I always will be, but I find it extremely difficult to talk to the media about it," she says, politely dissuading this correspondent from visiting her at her home in the Dehra Dun cantonment.

Her grief is private. For the shy village girl from the hills, the glare of the media was something that had remained behind the television screen. Her husband's death had brought the media home and she was uncomfortable with that.

"It is hard for me to believe that my husband is no more. I can hear his laughter and see his smiling face. Sometimes I feel that he will just walk through the door again," she says over the phone.

Vinita and her two children -- Gaurav, 14 and Preeti, 11 -- lived in Manesar, Haryana, where Gajendra Singh Bisht was posted.

He was on deputation from the Indian Army's Special Forces Parachute Regiment to the NSG's 51 Special Action Group and was sent from the NSG headquarters to Mumbai on the night of November 26.

Deputed to clear Nariman House, after clearing the top floor of the terrorists, he closed in on the terrorists when a grenade hurled by them injured him. He continued to engage the enemy at the peril of his own life.

'He injured one of the terrorists and forced the other to retreat inside a room. He continued the encounter till he succumbed to his injuries.

Havildar Gajender Singh displayed most conspicuous courage against grave odds and made the supreme sacrifice for the nation in combating the terrorists,' read the citation for his Ashok Chakra.

Vinita Bisht and her children moved to Dehra Dun this year. The family now lives in a house allotted to them by the Indian Army. A petrol pump in Hardwar dedicated to Gajendra Singh Bisht will be handed over to his widow next month, a senior officer of the government in New Delhi told rediff.com

Vinita is a housewife and does not want to speak about whether she was offered a job from the government. "Can any kind of compensation make up for what we have lost? I do not think much about this -- a year has passed since he left and my mind is still to come to terms with him not being there."