News
Business
Movies
Sports
Cricket
Get Ahead
Money Tips
Shopping
Sign in  |  Create a Rediffmail account
Rediff.com  » News » Zardari is a criminal, a fraud and a third rater: Musharraf

Zardari is a criminal, a fraud and a third rater: Musharraf 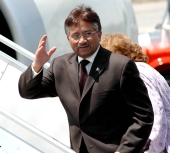 The bitter relationship between Asif Ali Zardari and his predecessor Pervez Musharraf hit its nadir when the former dictator called the Pakistan President a 'criminal, fraud and third rater' during a recent interview.

In an interview with journalist Seymour Hersh, Musharraf said that Zardari would go to any extent to save himself.

Hersh, in a detailed report on Pakistan, wrote, "Musharraf did not spare his successor. 'Asif Zardari is a criminal and a fraud. He'll do anything to save himself. He's not a patriot and he's got no love for Pakistan. He's a third-rater'."

Musharraf also revealed that he and General Kayani, who had been his nominee for the powerful post of chief of army staff, were still in telephonic contact.

He added that the Pakistan army was not capable of carrying out a mutiny. "There are people with fundamentalist ideas in the army, but I don't think there is any possibility of these people getting organised and doing an uprising. These 'fundos' were disliked and not popular," said Musharraf, who had engineered a coup to oust President Nawaz Sharif in 1999.

Speaking about United States President Barack Obama, he said, "The Muslims think highly of Obama, and he should use his acceptability -- even with the Taliban -- and try to deal with them politically".

Musharraf spoke of two prior attempts to create a fundamentalist uprising in the army. In both cases, he said, the officers involved were arrested and prosecuted.

"I created the strategic force that controls all the strategic assets -- eighteen to twenty thousand strong. They are monitored for character and for potential fundamentalism," he said.

However, Musharraf acknowledged that the situation in Pakistan had changed drastically  since he'd left office. "People have become alarmed because of the Taliban and what they have done. Everyone is now alarmed."

Hersh said Pervez Musharraf lives in unpretentious exile with his wife in an apartment in London, near Hyde Park.

'Musharraf's legacy will not be negative'