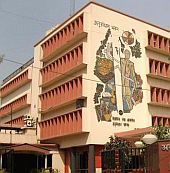 The Council of Scientific and Industrial Research resembles a war zone these days and on either side stand Dr Shiva Ayyadurai, Scientist/Technologist of Indian Origin, and those on top of the organisation's hierarchy.

All it took was a letter from Ayyadurai addressed to Prime Minister Manmohan Singh for sparks to fly. In the letter, he cried foul over the manner in which he had been asked to pack his bags for 'taking on the CSIR leadership'.

Though the CSIR cites a high pay package demand from Ayyadurai as reason for his termination, the Indian-American scientist and entrepreneur believes he has been victimised. It is illegal and irrelevant, he claims.

According to Ayyadurai, it all started when CSIR Director General Samir Brahmachari gave him a handwritten offer and detailed job description of the STIO's post.

In June this year, Ayyadurai was in India on a Fulbright scholarship. "At that time, a scientist whom I know said the director general of CSIR would like to meet me. I met him the next day and he invited me to join the organisation and make it into a centre of excellence," Ayyadurai said.

In a handwritten note, Brahmachari promised Ayyadurai that he would be the CEO of various companies he spins off and that he would also be eligible to be stake in such companies.

"I accepted it because in the United States if two CEOs shake hands, the deal is done. In this case, I got a written offer few days later and it was fine," Ayyadurai said, adding, "It was much later on that I realised that according to Indian law, he can't even promise those things."

Meanwhile, immediately after taking over, Ayyadurai set his sights on creating a structure for CSIR-Tech -- a company that would work with CSIR scientists to spin off their inventions into moneymaking products.

Ayyadurai and another scientist, Deepak Sardana started working on a report on the ways in which the organisation can be turned into a profit-making centre of excellence. In the months that followed, Ayyadurai says he visited almost all of CSIR's 42 laboratories and spoke to a majority of its 4,000-odd scientists. After this, Ayyadurai and Sardana compiled a 47-page report titled 'CSIR-Tech: Path Forward'.

In the report, the two entrepreneur-scientists highlighted 12 CSIR-developed technologies that had the potential to generate billions of dollars for the organisation. "Some labs and some of their products and technologies were better than anything else available in the world," Ayyadurai said.

However, what really set the cat among the pigeons was a chapter in the report on "challenges".

The four-page chapter talks about the difficulties scientists face with the leadership. The duo talked about how the organisation suffers from a "lack of professionalism"; how some scientists feel a "loss of faith in leadership" and how a coterie of sycophants might ruin it all for the organisation.

Ayyadurai and Sardana also suggested that CSIR introduce "openness in communication" and establish "accountability of all participants".

Last week, the CSIR sent Ayyadurai an official letter withdrawing the offer to appoint him as STIO, which the latter ignored claiming that it was irrelevant as he had already accepted the offer.

In fact, he put his foot down and continued to stay at the official bunglow and work on his controversial report.

But an unrelenting CSIR, on Friday, sent a letter terminating his stint as a "business consultant".

However, Ayyadurai claims: "This is also illegal and irrelevant. I was never hired as a business consultant. I was hired as an STIO. So how can they terminate me from a post that I do not even hold?"

Though Ayyadurai claims to have documents and letters that say he has been appointed as STIO, the CSIR maintains that he was functioning under a short-term consultancy contract, which can be terminated at any time.

Despite repeated attempts by rediff.com, both the CSIR director general and press officer could not be reached for comment.

Meanwhile, the controversy -- that has brought India's premier scientific organisation under the scanner -- continues to simmer.
Krishnakumar P in New Delhi