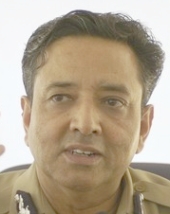 The threat posed by the burgeoning Maoist movement is grave and if it is not controlled in time, the Indian democracy could be in serious danger, believes Mahendra Lal Kumawat, former director general of the Border Security Force and former special secretary (internal security).

Kumawat, who delivered an hour-long lecture at a conference on Counter Terror 2009 in New Delhi, also talked to rediff.com's Vicky Nanjappa about the internal threat posed by the Maoists and the terror menace from across the border, in the wake of the terror attack on Mumbai.

On the dire consequences of underestimating the Maoist threat:

"This is the greatest internal threat to India. The bigger problem is that the Maoists are tying up with anti-national forces in order to further their cause. The belief that Naxalites will not team up with anti-national forces is a myth. They will do anything and everything to ensure that India does not become a super power and the country is robbed of its democracy.

In order to further their cause, the Maoists are procuring weapons from outside India and they have tied up with Jihadi elements. Initially, politicians of our country termed them as patriots.  I have gone through the literature of the Maoists in detail. They very openly state that the democracy in India is a sham and their main intention is to throw out democracy from our country.

We need highly specialised forces to deal with the sophisticated weapons they have procured through the Jihadi elements. The Maoists have mastered the strategy of tackling the security forces by outnumbering them in the jungles. While the threat looms large, the apathy shown by some of the state governments in dealing with this issue is terrible. Take Bihar for instance. There have been no fresh recruitments in the police force for 14 years. This means that there are no young cadres to fight the Naxals. The case in Jharkhand is similar.

The Maoists are adopting general warfare and their fight against our security forces is restricted to the jungles. Very few police personnel can fight in the jungle. The major difference between the police force and the Maoists is that the latter are ready to die for their fight, the policemen are not.

This is because our police personnel do not have the motivation that the Naxals do. Another issue that needs to be mentioned is the temporary tenure of a police man. His tenure is like a football; before a policeman can get accustomed to the situation, he gets transferred.

The biggest culprits who have given rise to this problem are civil rights activists and film producers who spare no effort to romanticise the cause of these Maoists. Movies are being made to depict them as heroes. What these people don't realise is that by romanticising the cause of the Maoists, they are only contributing to the bloodshed.

There are certain issues that one needs to bear in mind. We need to understand their ideology. We must realise that the Maoists are not friends of this nation. Whoever thinks in this manner is living in a fool's paradise.

It would be foolish to use the Indian Army to curb the Maoist threat. Our police forces should be upgraded to fight these people. Using the Army against them means we have lost the battle and accepted that our police are incapable of fighting these people.

On the Mumbai terror attack and the threat from across the border:

"During the Mumbai terror attack, there was an absolute lack of coordination, which made the attack a successful one. What happened on that day was horrid. The scene was chaotic. The Mumbai police commissioner was not available in the control room and hence they were not able to coordinate and counter the attack.

We speak so much about enhancing security. However, enhanced security alone will not help in preventing a Mumbai-type attack. Intelligence gathering is a key aspect (of preventing a terror attack) and there has to be constant upgrading of our intelligence network. We must also make efforts to network and coordinate our forces so that the enemy is on the back foot. We must create a data base of people posing a threat to our nation and each person in the security force must have access to the same.

Securing our borders is also an important aspect of fighting terrorism. We are aware of the fact that a person determined to enter the country will do so anyway. What we need to do is to secure the borders even more.

I personally feel that there is a grave threat from our border with Bangladesh. This border witnesses a lot of infiltration and this border ought to be fenced completely. As I pointed out earlier, there have been instances of people entering the country from across the border. They bribe the security forces and at times even kill them to enter the country. The need of the hour is not to slip up at any cost and maintain an eternal vigil.