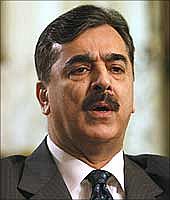 Pakistan wants the early resolution of the Kashmir issue according to the aspirations of the Kashmiri people, as this is imperative for lasting peace in the region, Pakistan Prime Minister Yousuf Raza Gilani said on Monday.

Gilani made the remarks during a meeting with 'president' Raja Zulqarnain Khan and newly-elected 'prime minister' Raja Muhammad Farooq Haider of Pakistan-occupied Kashmir.

"The whole nation is united on the Kashmir issue and Pakistan wants its early resolution according to the aspirations of Kashmiri people as this is imperative for lasting peace in the region," Gilani was quoted as saying in an official statement.

"Pakistan's principled stance on Kashmir issue remains unchanged and we will continue extending political, moral and diplomatic support to the people of Kashmir," he added.

Referring to his recent meetings with various world leaders, Gilani said he had highlighted the Kashmir dispute and emphasised the need to resolve it. Khan appreciated Gilani's endeavours in raising the Kashmir issue at different forums and thanked the government of Pakistan for its support to the Kashmiri people.