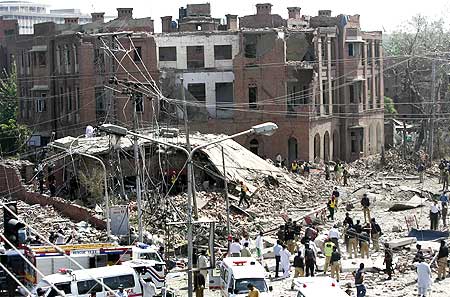 Suspected Taliban militants on Wednesday brazenly targeted the provincial headquarters of the Inter-Services Intelligence in Lahore, detonating an explosive-laden car, leaving at least 35 people dead and over 250 wounded.

Though heavily armed militants, believed to be two to four in number, failed to reach the main premises housing the ISI office, they detonated the explosives, which damaged the building and totally flattened the nearby city police rescue office.

The terrorist hit squad headed their vehicle towards the two buildings located just off the Mall Road, but as heavily armed guards stopped them, they came out and exchanged fire with the guards, before setting off a massive blast.

District Coordination Officer Lahore Sajjad Ahmed Bhutta said a car loaded with explosives rammed into the barriers on the road leading to the buildings housing ISI and the Lahore police office.

Though the Punjab government officials confirmed that only 18 people were dead, the privately-run Ehdi Ambulance Service has put the death toll at 35. The hospital officials said 13 of the dead were policemen and seven were ISI officials.

Commissioner Lahore Khusro Pervaiz said that 18 persons, mostly policeme, had been confirmed dead so far and 187 people had suffered injuries. Police chief Pervaiz Rathore estimated that over 100 kg of explosives had been used in the blast. He said the death toll could rise as a number of people were still trapped under the rubble.

"A white car approached the ISI headquarters and opened fire on the police guards and also threw grenades before heading towards it," Abid Ali, an eyewitness, told PTI.

Lahore is the second largest Pakistani city and today's attack was the third major terrorist assault on the metropolis this year, heightening fears that militancy may be creeping into the Pakistani heartland.

No organisation immediately took responsibility for the blast in the city. The blast comes less than two months after the attack on the police academy at Manawan, close to Lahore, on March 30 this year, when armed gunmen laid a siege resulting in the deaths of 10 people, including eight policemen.

Lahore was also the scene of an attack on the visiting Sri Lankan cricket team on March 3, in which eight people, including six police officials, were killed and six cricketers were injured.

"Apparently the target was ISI," a witness said, adding that the terrorists first opened fire on police guards and then rammed the vehicle into the barrier in a bid to hit the buildings.

TV channels reported three suspects have been arrested. The attack came a day after Taliban spokesperson Maulvi Mohammad Omar threatened attacks across Pakistan if the military operation in Swat was not stopped immediately.

A police source informed PTI that some suspects involved in the attack on the Sri Lankan cricket team were being interrogated in the ISI building.

In March 2008, some suspects involved in the Naval War College attack were being interrogated at the Federal Investigation Agency building, when a mini-truck loaded with huge explosives ran into it, killing 30 people, mostly FIA officials.

TV channels reported that approximately 40 vehicles were destroyed in the blast, which also caused considerable damage to nearby buildings. Soon after the incident, the army personnel cordoned off the area. The Special Investigation Group of FIA also reached the spot and collected forensic evidence.

The impact of the blast was so powerful that windowpanes of government buildings, private offices, schools and a cinema hall within one kilometre radius were broken.

Two schoolchildren were reportedly also killed in the attack. The injured were shifted to the major hospitals in Lahore.

M Zulqernain in Lahore
Source: PTI© Copyright 2020 PTI. All rights reserved. Republication or redistribution of PTI content, including by framing or similar means, is expressly prohibited without the prior written consent.
SHARE THIS STORY
Print this article