News
Business
Movies
Sports
Cricket
Get Ahead
Money Tips
Shopping
Sign in  |  Create a Rediffmail account
Rediff.com  » News » 'The US is making a mistake in Pakistan'

'The US is making a mistake in Pakistan' 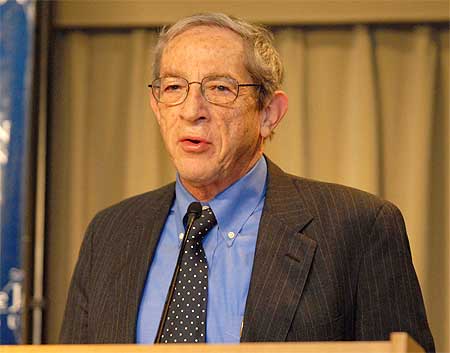 A conference on 'Pakistan's Troubled Frontier: The Future of FATA and the NWFP' in Washington, DC witnessed several speakers expressing concern about the situation in Pakistan.

In the third of the five-part series (read the first and second), Stephen P Cohen, the distinguished expert on South Asian affairs, discusses the crisis.

An acute equipment shortage and an army that has only been trained to fight against India has left the Pakistani army highly ineffectual in its counter-insurgency efforts against the Taliban, he said.

"There's truth to what the Pakistanis will tell you, that they lack equipment," Cohen, who has written books on both the Indian and Pakistan armies, said. "They are short on helicopters, short on night-vision devices, two main things, and they may be short on intelligence assets."

However, he said, this does not obscure the central fact, that the army is "trained and prepared and geared to fight India than to fight their own people, which is what they have to do. There is no dedicated counter-insurgency force."

Setting out the case of the Pakistan army's shortcomings, Cohen said, "There is an ethnic mismatch in the army. For example, there's a great fear in the army -- and I've heard this from a number of sources -- that the Punjabi soldier, perhaps not the Punjabi officer -- may be infected or could be infected by the local sectarian conflicts that are raging in Punjabi itself. So the ethnic balance in the army presents some problems."

Compounding the problem, he said, is the fact that there is zero expertise among civilians in the government about national security, unlike their Indian counterparts, since India has all along had a civilian government and has constantly been engaged in counter-insurgency operations within the country.

As a result, Cohen said, Pakistan's Chief of Staff General Ashfaq Kayani has no civilians to turn to "when he has to provide a balanced strategy -- nobody."

The United States, argued the expert, was making the mistake of asking Pakistan to do much more than it was capable of.

"There are limits to what that the government can do -- they can barely stay in power, let alone clean up madrassas, fight a counter-insurgency, guard the nuclear programme, practice democracy, treat women properly, revive reform in economic policy."

It is therefore necessary for the administration of US President Barack Obama to find out what it is that Pakistan is capable of doing, and what it will actually do, Cohen said. "In a sense, our relationship with Pakistan should be based both on what we think is important and what they can and what they will do."

The BBC's Pakistan correspondent Haroon Rashid said since Pakistan and the US had jointly created the Taliban, it was necessary for the two countries to join hands to "put the genie back into the bottle."

The majority opinion in Pakistan is that the US is forcing its agenda on that country, said Rashid, pointing out in passing that the administration's Special Envoy for Afghanistan and Pakistan, Richard Holbrooke, is known as 'the bulldozer.'

Arguing that this perception needed to change, Rashid said it was vital for the Pakistan government to be seen as working with the US on an equal footing, "without being labelled as agents of the US."

In common with the other panellists, Rashid said Pakistan's failure to deal with extremist groups was in part because "the political and military strategy to deal with the militants has never been uniform."

Further, he said, the Pakistan military's obsession with the idea that its main threat is India, and the perpetual tensions that notion creates, has been "another drain on resources" that should have been employed to contain the spread of terrorism.