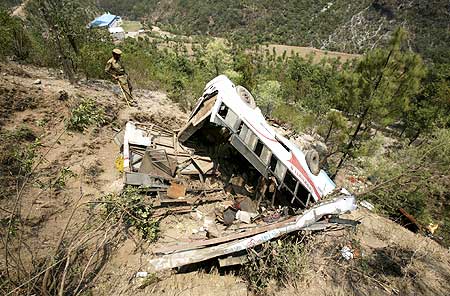 At least 25 people were killed and 43 injured when the bus they were travelling in rolled into a deep gorge in Reasi district of Jammu and Kashmir.

A senior police officer told rediff.com that the mishap occurred when the driver lost control of the bus, which was on its way to Udhampur from Katra.

"Rescue efforts were launched immediately and till now, we have extricated 25 bodies," the police official said, adding that the injured had been rushed to a nearby hospital.

The critically-wounded passengers have been shifted to Srinagar.

Image: A security person stands beside the wreckage of the passenger bus
Photograph: Amit Gupta/Reuters

FIR against Mahua Moitra for remark on Goddess Kaali