'Dr Manmohan Singh, Save our Monsoon' 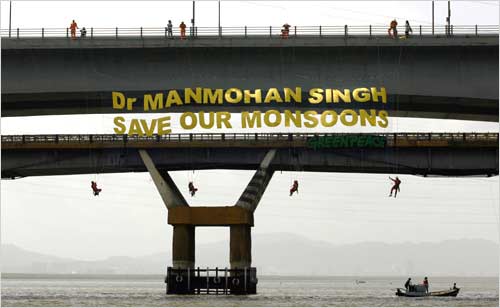 The Indian monsoon  lifeline of the subcontinent - will be significantly affected by climate change, according to a Greenpeace paper titled 'Monsoon Wager: Climate change and the Indian Monsoon', released on the sidelines of the World Environment Day earlier this month.

To drive home the point, eight Greenpeace activists hung an 80 foot banner with a message to the prime minister, that read, 'Dr Manmohan Singh, Save our Monsoon' from the Mumbai-Thane bridge linking the two cities which are amongst the most vulnerable to cyclones, sea level rise and flooding in the South Asian region.

According to the organisation, the Indian monsoon, which is the lifeline of the subcontinent, will be significantly affected by climate change.

In a statement, Vinuta Gopal, Climate & Energy campaigner Greenpeace said: 'The lives of millions of Indians, farmers, city dwellers, even those trading on the Mumbai Sensex, depend on the monsoon. The unprecedented flooding that Mumbai experienced in 2005 is estimated to have caused a direct loss of about Rs. 450 crore. Mumbai and India cannot allow the delicate balance of the monsoon to be thrown awry; we cannot afford to adapt if the monsoons are impacted, we simply have to stop that from happening.'