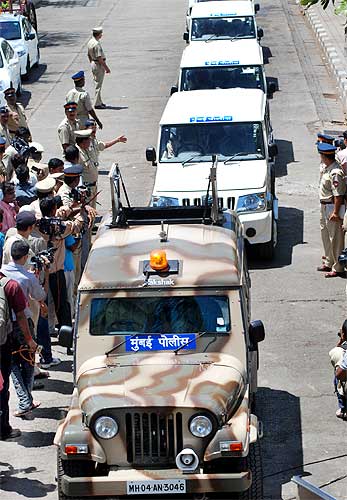 With its response to 26/11 terror strikes coming under flak, the Mumbai police on Monday inducted 207 vehicles, including three armoured ones, and said it was giving special training to 100 personnel to prevent such attacks in future.

Besides the armoured 'Rakshak' vehicles, the city police received 20 jeeps, nine vans, 21 towing trucks and four buses and 150 motorcycles, Police Commissioner D Sivanandhan said. "Three armoured vehicles are being inducted today and two more will be obtained so that all the five regional controls in the city has an armoured vehicle," he said.

The city police would also be getting 12 buses for ferrying large groups of police personnel, Sivanandhan said. The total cost of the vehicles was about Rs 4 crore. The police force was also training 100 personnel in collaboration with other security forces in each regional zone of the city, and equipping them with latest weaponry so that attacks from foreign shores could be tackled effectively, the commissioner said.

"These squads will be equipped and trained so that if there is an attack like November 26 in the future, we can tackle it in an hour and send back the terrorists in body bags," Sivanandhan said. Governement-appointed Ram Pradhan Committee, which probed the 26/11 attacks, had said in its report last week that there was "lack of coordinated and visible control" in the police force.

Image: An armoured car and jeeps at the induction programme in Mumbai.