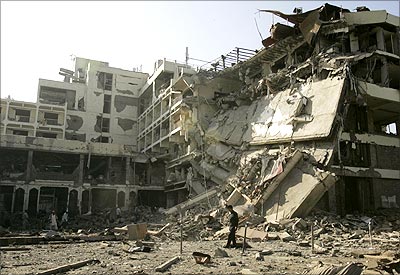 The death toll in the deadly suicide car bombing -- on a popular five-star hotel in the northwestern Pakistani city of Peshawar -- on Wednesday rose to 16 with the recovery of five more bodies from the rubble of the devastated building.

Several foreigners were among the injured victims. They included an employee of the UN's World Food Programme, three Nigerians, a German and a Somalian. Javed Khattak, a doctor at Lady Reading Hospital, said eight of the injured were in serious condition.

Police and rescue workers scoured the burnt out rooms of the Pearl Continental hotel for survivors and clues after the attack that occurred at 10.30 pm on Tuesday night. They worked through the night despite a power outage caused by the powerful blast.

Five bodies were pulled out from the debris early today morning, taking the death toll to 16, said Peshawar police chief Sifwat Ghayur. Other police officials said the casualties could rise as some people were feared to be trapped under the rubble.

Reports said three of the bodies found today were those of terrorists involved in the attack but there was no official word on this. Police found some significant clues in their search, including footage captured by the hotel's close circuit TV cameras minutes before the explosion.

The footage showed at least five attackers entering the compound at the hotel's rear in two vehicles, ARY News channel reported. Guards fled as gunmen in the first car opened fire while the second vehicle, a pick-up truck, entered the parking lot and then exploded, the channel quoted its sources as saying.

The attack was reminiscent of the suicide bombing of the Marriott Hotel in Islamabad last year. Police officials said the truck used to bomb the Pearl Continental was packed with nearly 500 kg of explosives.

Both hotels are owned by Pakistani tycoon Sadruddin Hashwani and a recent media report had said the US State Department was mulling the purchase of the Pearl Continental to use the building as the American consulate in Peshawar.

A section of the Pearl Continental at the rear was reduced to rubble by the massive blast, which destroyed nearly 50 vehicles in the parking lot. The blast also damaged a nearby mosque and several other buildings.

Dozens of UN employees and aid workers were staying at the Pearl Continental before heading out to refugee camps, which have been set up for people displaced by the military operations against the Taliban in Swat and nearby areas. The Pearl Continental is well guarded and parking in front of the hotel is heavily restricted. Cars have to undergo several security checks and travel past concrete and metal barriers to reach the front of the hotel.

The hotel, located near the official residences of top army officials, is a favourite hang-out for foreigners and elite Pakistanis, making it a high-profile target for militants. Pakistan has witnessed a wave of deadly bombings and suicide attacks in the wake of the military operations in Swat and militants have struck in Peshawar, Islamabad and cultural capital Lahore.

North West Frontier Province Information Minister Mian Iftikhar Hussain said, "The attack is a reaction to the army offensive in Swat and Malakand. The possibility of this type of terrorist attack in the future cannot be ruled out."

Image: The wreckage outside the Pearl Continental Hotel in Peshawar, the morning after a suicide car bomb struck the hotel | Photograph: Akhtar Soomro/Reuters