News
Business
Movies
Sports
Cricket
Get Ahead
Money Tips
Shopping
Sign in  |  Create a Rediffmail account
Rediff.com  » News » 'I think of myself as an advocate of the truer face of Islam' 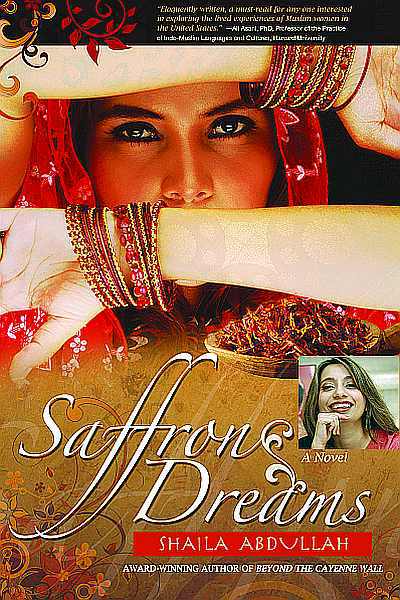 I first heard about Shaila Abdullah through Austin's South Asian Professional Alliance, a budding NetIP group. Curious, I ordered a copy of her second book Saffron Dreams. I discovered it to be a thought-provoking story of a 9/11 widow and Muslim writer, living in the US, who shapes a novel even as a baby grows in her womb. The protagonist -- Arissa Illahi, a veil-wearing Muslim woman -- loses her husband in the 9/11 tragedy. Pregnant and alone, she discovers an unfinished manuscript penned by her husband and decides to finish it as a tribute to him.

It's an interesting read and afterwards I made up my mind to meet the author. Shaila, 37, lives in Austin, Texas and runs the marketing plan for Saffron Dreams herself and with dogged determination.

She is a designer by profession, a writer by night, and a mom and wife 24/7. Add to that all her non-profit work. Her full schedule makes it tough to make an in-person meeting work. So we agree to start out with a few phone conversations.

Shaila's voice is bubbly and merry when we make contact. Within minutes it seems like we have known each other forever. During our second conversation -- that happens at night -- she talks to me from her study near her five-year-old's room.

"On the nights I was working on Saffron Dreams, pounding away on the keyboard with my two fingers, Aanyah would tell me the next morning, 'Mommy, would you just click once tonight?' The poor girl has learned to sleep through it all now!"

We discuss everything from babies to veils to the situation in Pakistan to Muslims living in Texas (a state that is traditionally the face of the more conservative South) and how tough it is for Asian-American writers to make it in the literary fiction market.

Shaila remembers her initial days in the US. "We first moved to the US in 1995 and I still remember, people would look at me and wonder where I was from. It was California, and their first thought was that I was Latina. When I would tell them I was from Pakistan, they would ask me what part of India that was in. And now the West is so much more aware of Pakistan, although for unfortunate reasons."

I mention her second book Saffron Dreams and how I found it touchingly beautiful. In my mind, it's the kind of book that talks to you. It makes you stop and think every step of the way. I am interested in knowing her journey.

Shaila's story is inspiring because she is a completely self-made author. "I've always been a writer and artist at heart and written passionately since a child. But when the time came to choose a career, I chose design and writing became a cherished hobby. My parents gave me the freedom to choose my career, to keep writing, etc. Even now I always bounce ideas off my father and show him all my work so he can critique it," she explains.

Shaila, her husband and daughter moved to Texas in 2000. She continued to write for years and in Texas she started to search for agents and tried contacting publishers but realised at some point that it was a discouraging road.

"Breaking into the literary fiction market can be frustrating. Especially for an Asian author whose stories have Asian-American storylines," she says.

At that point, Shaila decided to self-publish her first novel and run her own marketing campaign, including entering awards and winning them! Her 2005 debut book, Beyond the Cayenne Wall is a collection of stories about Pakistani women struggling to find their individualities despite the barriers imposed by society.

The collection won the Norumbega Jury Prize for Outstanding Fiction and the DIY Festival Award, among other accolades. Shaila also received a grant from the Hobson Foundation for her second novel, Saffron Dreams about the trials and tribulations of a 9/11 Muslim widow.

"In the novel, I have attempted to capture how ordinary Muslims were affected by the tragedy of 2001 -- the silent majority who lead very normal lives and are law-abiding citizens. They are the ones we never hear about because their lives are too ordinary to be the subject of the nightly news."

She has written several short stories, articles, and essays for Dallas Child, Web Guru, About Families, Sulekha, Women's Own, She, Fashion Collection, Daily Dawn. But the discipline required for writing can be a challenge for this full-time mother and career woman. "I write at night. I need to be very disciplined and diligent to not let my hard work go by the wayside. Running your own marketing campaign can be tiring."

Shaila also designed the cover and layout for her books.

I am curious to know the inspiration for her ideas, especially because her stories focus on Pakistani women, the barriers imposed by society and because Shaila herself grew up in a more liberal setting in Pakistan.

"I never wore a burqa or veil so I had to, in fact, do a lot of research and understand women who wear the veil," she says. She says her ideas are generated from "imagination, research and keen observation of life around me."

Shaila says the defining moment of Saffron Dreams is when the protagonist Arissa opts to discard her veil. "But then again, I have strived to show what a veil truly means to Muslim women and how it has much more than just a religious significance. It could be an emotional attachment or even a part of their personalities. It's a part of their being and their consciousness and if they decide to part with it, it is rarely a simply made decision." She clarifies that she does not necessarily advocate doing away with the veil.

Our conversation turns to Muslims living in the US since 9/11. "Since 9/11 things have drastically changed. It is not unusual to turn the television and hear about the weather in Pakistan," she laughs. "There is uneasiness among Americans and they are not colour blind any more."

But she also feels that this is an open society that accepts everyone. "There was a huge sense of anger at that time about why, who, etc. Many writers have picked up their pens to defend themselves." She points out that the Asian-American genre of writing has grown very popular in a post-9/11 America.

"We writers try to offer a view different from the media. This is a genre that talks about general everyday issues in a different part of the world, sometimes on a lighter note. Life is such an on-going learning process. Even we Asian-Americans can benefit from each others' experiences. We try to make it work and accept this society," she says.

Shaila lived for five years in California and for the past nine in Texas without experiencing any incident of discrimination.

"That doesn't mean I haven't heard of it happen," she laughs. But she feels America is an accepting society and a very forgiving community. She believes that the American-Muslim community portrays a better face of Islam, a more progressive face.

"I think of myself as an advocate of the gentler, truer face of Islam rarely seen in the media. I strive to bring to light the problems in Pakistan such as poverty, lack of women's rights"

We talk about our origins, belonging and how they influence our thought processes early on. Shaila's parents are from India. Her mom was born in Bhavnagar and dad in Mumbai. They moved to Pakistan as late as the 1960s.

"When you talk about belonging, we've never really belonged anywhere," she says of herself and her siblings. "We belong to this really tiny branch of Islam, a very progressive branch. Hundreds of years ago some of our leaders lived in Iran and brought with them (to India) some Persian customs. We're called Ismaili Muslims," she explains.

"But I chose to live in the US because here I have the freedom to actually write what I want and I can use my book circuits and tours as a platform for healthy dialogue and to highlight important issues in Pakistan. Something that I believe can make a real difference eventually," she says.

Shaila knows she has her work cut out for her. "The West has a long way to go but progress has its own pace. America is still an accepting society and the situation in Pakistan is so hard to gauge."

She laments the lack of strong leadership in her home country. "Pakistan needs a more transparent leadership -- people who sincerely and genuinely care about Pakistan and its welfare. Unfortunately, I can't see anyone right now on the horizon there," she says.

"It's such a rich culture and has so much potential and the current situation is just unfortunate -- but I always hold hope in my heart."

CEC, EC give up perks as part of austerity measure