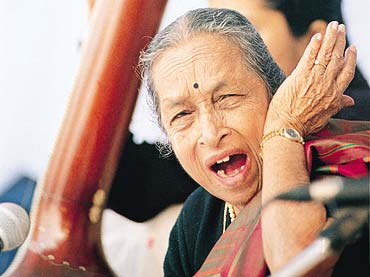 The 97-year-old vocalist had been undergoing treatment for cardiac and respiratory problems in Hubli, Karnataka.

Gangubai Hangal, who was undergoing treatment in a private hospital for chest congestion, was shifted to a super-speciality hospital on July 16 after she developed breathing problems.

Hangal died at 7.10 am at the Lifeline Emergency Care Centre in Hubli.

Close family members, including her three sons and two daughters, were by her side when she breathed her last.

Nagraj Tankasali, director of the private hospital informed that the singer had died of cardiogenic pulmonary oedema.

The doyenne of the Kirana Gharana was awarded India's prestigious civilian honours of Padma Bhushan and Padma Vibhushan in 1971 and 2002 respectively.

Family members at the hospital told rediff.com that the cremation of the renowned musician will be held at 9.30 am on Wednesday. A host of dignitaries, including Chief Minister BS Yeddyurappa and the rest of his cabinet members, are expected to arrive in Hubli on Tuesday to pay their respects.

However, the family is still undecided on where exactly the cremation would be held.

The venue where the musician will be laid to rest has been tentatively fixed as the Gurukul. However, nothing has been finalised as yet, a family member said.

Gangubai Hangal was born in 1913 at Dharwad to Chikkurao Nadiger, an agriculturist and Ambabai, a celebrated vocalist of Carnatic music. Her family shifted to Hubli in 1928. Initially, she learned classical music from Krishnacharya and Dattopant Desai before studying under Sawai Gandharva.

She started performing in local celebrations and Ganeshotsavas in Mumbai as a teenager. Gangubai used to say that she made music since she felt that she was duty bound to pass on to the future generation what she had learnt. Known for her loyalty towards the Gharana-Parampara she is probably the last of the titans to be representing the purity of Hindustani classical music.

She used to say that her most important influence was her Guru or teacher, late Sawai Gandharva. "He would teach us one phrase and never go on to the next until and unless we had mastered it. It was difficult and there were times when I used to practice for hours together and there were also times when I would cry out of frustration. Whatever the case was he never gave up until I mastered it."

Gangubai was the recipient of several prestigious awards like the Karnataka Sangeet Nritya Academy Award, in the year 1962, the Padma Bhushan in 1971, Padma Vibhushan in 2002 and the Sangeet Natak Akademi Award in the year 1973.

Gangubai used to say that her earliest memories of music are of running around the house to listen to the gramophone records in street corners. I used to love that music. I believe that listening is also an art, and that a discerning audience draws out the best from an artiste.

Legacy of Gangubai Hangal will live on