Terror group with Qaeda links suspected to be behind Jakarta blasts 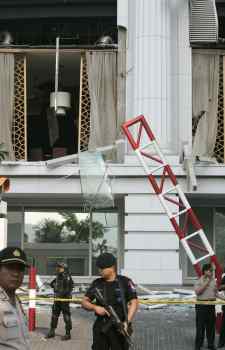 In coordinated bombings, suspected terrorists targeted two luxury hotels in Indonesian capital Jakarta on Friday, killing at least nine people and injuring 50 others, many of them foreigners.

"There were two explosions, one in the Marriott and one in the Ritz-Carlton," a police spokesman said. Mostly foreigners stay in these two hotels. It is not yet known if any Indian was among the dead or injured.

"So far, nine people have been killed. Eight died at the scene and one in the hospital," the spokesman said, adding 14 foreigners were injured in the blast.

An unexploded bomb was also found in a room of the Marriott hotel after the bombings, a senior official said.

Police said in Jakarta that 'high explosive bombs' caused the two blasts in the upscale Mega Kuningan business district in the centre of the city at 7.50 am local time.

Some windows of the Ritz Carlton were blown out though Mariott seemed to have undergone little damage, reports said. Police have sealed off the area.

Meanwhile, a car bomb also exploded near a shopping complex in northern Jakarta, two hours after two luxury hotels in the city-centre were bombed, reports said. It was unclear if anyone was killed in the third explosion.

President Susilo Bambang Yudhoyono, who was re-elected to a second term in the mainly Muslim country last week, was "deeply concerned over this incident," his spokesman said.

Antara News, a state-run agency, quoted a witness as saying he saw four foreigners among the wounded. The Ritz-Carlton Hotel was to have accommodated soccer players from Manchester United of Britain, who are expected to arrive in Jakarta on Saturday.

The police are trying to find out how the perpetrators had managed to execute the blasts, in spite of the high level of security in both hotels. Though the police suspect that the blasts were triggered off by massively powerful bombs, they have refused to comment on the matter.

Indonesian intelligence officials suspect that terrorist group Jemayah Islamiya might have been assisted by the Al Qaeda in planning the blasts.

Experts told rediff.com that the entire outfit may not have been behind the attack, but some members of the group, who believe that they can achieve their goals through violent methods, could have masterminded it. Experts say that if one takes a look at the nature of the attack, it is very evident that the group intended to target foreigners.

The Jemmah Islamaiah was founded in the year 1933 as a political outfit. Although it was branded as a radical outfit since day one, the leaders of the group struck a deal with the Al Qaeda approximately ten years ago.

Experts say that the Jemmah Islamaiah's deal with the Al-Qaeda made it clear that the target of these terrorist attacks should be foreign nationals to attract the attention of the international community.

Experts feel that a small splinter group within the outfit could have carried out these blasts. While older members of the group had favoured a more sober approach to achieve their goals, the younger lot wanted to emulate the terror tactics practiced by the Al Qaeda and Lashkar-e-Tayiba. They believe that mass destruction through terror attacks is the only way to achieve their goals.

Police authorities are looking for Noordin Top, a member of the group and an expert about bombs, in connection with the blasts, according to ABC News.

Top, 'one of the most wanted men in Asia', might have coordinated the blasts, security experts told ABC News.

Jemayah Islamiya is believed to have masterminded several terror attacks across Indonesia, included the bombing at Bali, which killed nearly 202 people, with the help of the Al Qaeda.

The group carried out another attack on the Marriott in 2003, in which 13 people were killed. Indonesian authorities launched a severe crackdown on terrorist activities after the attack. The action was widely believed to have been successful in wiping out most terrorist outfits in the country, and today's terror attack has taken the authorities by surprise.

Image: Police stand guard in front of the damaged exterior of the Ritz-Carlton Hotel in Jakarta