Western science is frozen in the superstition of materialism: Deepak Chopra 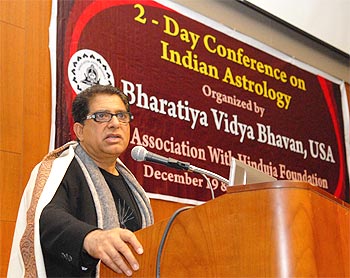 With these words, spiritual guru Dr Deepak Chopra explained the fundamental nature of the universe and argued that modern science has much to learn from the Vedic worldview and its associated mathematics.

Chopra was speaking at the Indian Astrology Conference, organised by the

Technology in New York on December 18 and 19. He was the chief guest.

Admitting that he lacked the wisdom some of those attending might have, given that his training was in endocrinology, Chopra spoke of how he had come to realise -- in spite of his medical training -- that Western medicine was straitjacketed by reductionism. That, he said, was when he began to look into Vedanta.

"Western science is still frozen in an obsolete, Newtonian worldview that is based literally on superstition -- and we can call it the superstition of materialism -- which says you and I are physical entities of the physical universe," he said.

Describing the problem of perception, Chopra pointed at a red band on the edge of the banner for the conference, saying that nothing red was coming from the band to the viewer's eyes; it was just frequencies that the brain interpreted as red.

"Is the colour red there or in your consciousness," Chopra asked, answering

Chopra said that good scientists --- such as Amit Goswami, a retired theoretical nuclear physicist and member of The University of Oregon Institute for Theoretical Physics, and Hans-Peter Durr, a physicist, philosopher and the former vice executive director of the Max Planck Institute for Physics -- agreed that 'the universe is made up of subatomic vibrations that are going on and off at the speed of light.'

He said the real universe could be viewed through Jyotish (astrology) but not through the distorted lens of perception.

"Past, present and future are actually one phenomenon, one picture, one reality, one consciousness." Chopra said, adding that this explains simultaneity in the universe.

He said this held true for biological organisms, too: The hundred trillion cells in the human body were more than the number of stars in the Milky Way and performed a hundred trillion activities every second.

"Every cell instantly knows what is happening in every other cell, in fact, in the whole universe," Chopra said.

Others who spoke at the conference were Vedic astrologer Chakrapani Ullal, who gave a historical perspective of astrology in the East and West, astrologer Raj Kumar Sharma, palmist Rakesh Sharma and physician and author T I Radhakrishnan.

The event hosted some panel discussions, including those on the scientific basis for and the practical aspects of astrology. A press release described Jyotish as an ancient system that is one of the six auxiliaries of the Vedas developed to explain the movements of planets, sub-planets etc on the universe at large.

Dr Uma Mysorekar, president of the Hindu Temple Society of North, was the guest of honour.

A correspondent In New York