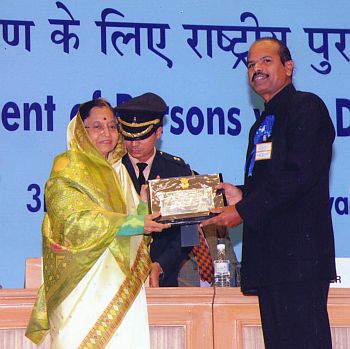 Tamil Nadu was the first state to show the way for the welfare of the mentally disabled in the country. Now Tirunelveli, a city corporation in the southern part of the state, has won acclaim from President Pratibha Patil for its work in the field.

In 2009, the district, throught committee set up for the care of the disabled, issued 754 guardian certificates to parents of children with mental disability, the highest in the country. It is another story that the number seems negligible from an all-India perspective.

District rehabilitation officer T Manohar told rediff.com, "We got the award for issuing 754 certificates. As of today, we have issued 1,070 certificates. This is only for those who have mental disabilities. All the other disabled have been issued identity cards. This helps them avail government schemes meant only for them."

A survey undertaken by government officials shows that there are 26,308 persons differently abled persons living in this district. Among them, 3,308 are mentally retarded, 109 suffer from autism, 879 from cerebral palsy and 755 suffer from multiple disability.

These certificates are meant only for children above 18 years of age.

The Tamil Nadu government gives 4,000 mentally disabled persons Rs 500 every month for their upkeep. The social welfare department also helps them with school admission and vocational training. An association of parents of these children has been formed so that they can share their experiences and help each other.

The three-member committee which has to be established in every district has the collector as its chairman. The second member has to be differently abled and the third has to be the head of an NGO working among the disabled.

The Tirunelveli committee has Dr Manakavela Perumal (who is himself a polio patient) and A Joseph, who runs the Deva Home and School for the Mentally Retarded, as members.

Tamil Nadu is the only state which has a separate department to look after the differently abled. In other states this is usually clubbed with the social welfare department. But the TN department only has four officers, one watchmen and one driver to look after the entire district, but despite this it tries to make a mark among the disabled.

The state government provides tricycles to those who have polio in both legs, while wheelchairs are given to people with polio in both hands and legs. Crutches and calipers are also provided free where needed. Hearing aids are provided for the deaf along with solar-powered batteries.

The blind are provided with dark glasses, walking sticks and Braille watches. Those who lose their legs in accidents are provided artificial limbs.

Children who attend school in spite of their handicap are encouraged with Rs 500 a year from standards one to five. From standards six to eight the amount is Rs 1500 per year, and from standard nine to 12 this increases to Rs 2000 per year.

Those who study to become lab technicians are given Rs 300 per month. This amount is also given for those undergoing computer training.

Those who are handicapped and apply for a bank loan to start their own business will be given a subsidy of Rs 3000. Those who start a small shop get a subsidy of Rs 5000 on a loan of Rs 15,000.

All the above are given only to people living below the poverty line.

A senior government official, who did not want to be named, said of the district's award, "If you get a national award for giving just 754 certificates, imagine how pathetic the service in the rest of the country is."