US working very hard to solve Kashmir imbroglio, without any mediation: McCain 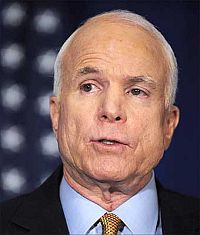 American Senator John McCain, ranking Republican on the Senate Armed Services Committee and erstwhile presidential nominee, has said he is aware that the Obama administration is working very hard to help resolve the Kashmir imbroglio, sans any US mediation of the issue between India and Pakistan.

In an interaction that followed his delivering a major speech on the United States President's recent revised strategy on Afghanistan at the Heritage Foundation -- a leading conservative think tank in Washington -- McCain, asked if there's any way the US can help India to become a major global power by removing the albatross of the Kashmir dispute that inhibits its acquiring such a status, said, "I have been familiar with the Kashmir situation for many, many years, and it has been a source of friction for many, many years."

Thus, he said, "I was pleased to see that the Indian government and the Pakistani government, seemed to be working towards more negotiations and at least, tentatively looking for an agreement on this very divisive issue."

In this regard, McCain said he was cognizant that 'this administration and the President and the Secretary of State are working very hard to try to -- not act as intermediaries -- but to do everything they can to encourage a peaceful settlement of the Kashmir issue.'

"I would also point out," the longtime lawmaker said, "that there is still significant numbers of Pakistani troops on the Kashmir area and we'd love to see more of them -- although some of them have come -- over in Waziristan and other areas, including Quetta and others," taking on the Taliban and the Al Qaeda and not massing on the border with India.

During his joint press conference with Indian Prime Minister Dr Manmohan Singh that followed their summit on November 24, President Barack Obama acknowledged, "Obviously, there are historic conflicts between India and Pakistan," but asserted that "it is not the place of the United States to try to -- from the outside -- resolve all those conflicts."

However, he added, "On the other hand, we want to be encouraging of ways, in which both India and Pakistan can feel secure and focus on the development of their own countries and their own people."

During the question and answer session, reminded of how McCain strongly disagreed with Obama about the latter's contention of taking the war across the border into Pakistan against the Taliban and the Al Qaeda enjoying sanctuary in Pakistan's, McCain said this remained his view, despite recent reports that Obama has given the green light for US troops to engage in such search and destroy pursuits in Pakistan in addition to the predator drone attacks.

McCain argued that 'the best idea is to get our Pakistani friends and allies to help out in that effort, number one. Number two, is we all know it's no secret that there are predator and other across the border operations taking place against specific targets with the agreement -- maybe, I shouldn't use the word agreement -- the silence of the Pakistani government concerning that.'

"And, third of all," he added, "I would like to point out that if we were having this conversation about eight or nine months ago, there was enormous questions about the capability and commitment of Pakistan, and indeed, the very stability of the Pakistani government."

McCain, acknowledged that the 'they will continue to have difficulties, but the performance of the Pakistani military has far exceeded most expectations -- their operations into Waziristan and other areas.'

"In fact, there was a time a month or so ago, they were complaining that were weren't doing enough on the Afghan side of the border. So, I still believe that a United States outright military attack into Pakistan, would probably arouse already seriously latent -- and in some cases not so latent -- anti-American sentiment."

McCain said, additionally, he did not believe that 'we have exhausted the option of the Pakistani military carrying out this mission over time.'

In his speech, McCain, who supports Obama's surge of 30,000 troops into Afghanistan but has strongly criticised the President's decision to withdraw US forces in July 2011, said, "It doesn't matter whether we call it a 'cliff' or a 'ramp' or anything else. It's still an exit sign."

McCain also warned that it "sends the wrong signal to all in the region who are now hedging their bets -- Pakistani generals reluctant to cut ties with the Taliban, or Afghan civilians who ask our troops, 'Are you staying this time?' On this issue, the US administration and I will have to agree to disagree."

He returned to the warning by many that the Pakistani military and the Inter Services Intelligence would continue to hedge their bets and maintain their ties to the Afghan Taliban for strategic depth against India, particularly if they believe the US would cut and run in a few years later in his speech too.

"We must demonstrate to Afghanistan's neighbours -- many of which are now hedging their bets and playing both sides of the fence -- that the government of Afghanistan will prevail, that the insurgency will lose, and that to back the Taliban in this fight will only result in regional isolation, growing weakness, and deepening insecurity for states in the region," he said.

McCain said, "In all that we do, our goal must be the restoration of Afghan sovereignty  -- to help Afghanistan emerge from three decades in which it was a pawn of regional powers and a battleground for their conflictsand to ensure that Afghanistan never again serves as a base for terrorist attacks against America and our allies."