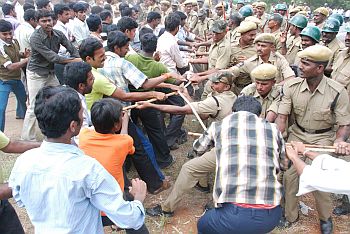 Fast-unto-death by Congress Member of Parliament L Rajagopal and several other leaders, pressing for a unified Andhra Pradesh continued on Wednesday even as Chiranjeevi-led Praja Rajyam Party came under pressure from its MLAs to end its support for a separate Telangana.

Rajagopal's hunger strike in Vijayawada entered the third day as he vowed to continue his fast till the bifurcation process came to a halt. "There is massive awareness and support for a unified Andhra Pradesh. We should promote it further. My fast would continue until this process (division of Andhra) came to an end. Even after that we shall promote the unity of Telugu speaking people", Rajgopal said.

Police forcibly shifted Ramakotiah and former Vijayawada mayor P Anuradha to hospital late on Tuesday night. "Police tried to spoil our peaceful fast but we are determined to continue our fast till the Centre makes a categorical statement against the division of the state. We are ready to sacrifice our lives for the cause of united Andhra Pradesh," D Umamaheswar Rao said.

He demanded that the Centre make a statement against the Andhra Pradesh break-up. Meanwhile, PRP MLA, G Srinivasa Rao demanded party chief Chiranjeevi to end his support to separate Telangana and work for a united Andhra Pradesh.

Chiranjeevi reportedly held discussions with party MLAs and other leaders over the matter on Tuesday and is likely to continue talks in the wake of the demand made by leaders from Coastal Andhra and Rayalaseema regions.

About 15 of the 18 PRP legislators hail from non-Telangana regions.

The situation is now peaceful as many students left for their native places after university authorities declared holidays till December 27, a police official said in Ananthapur.

He, however, said that tight security arrangements are still in place to prevent any untoward incident. In the Andhra University at Visakhapatnam, police shifted several fasting students to hospital as their health condition showed signs of weakening.

Rallies, sit-ins, road blockades and other forms of protests are being held across Coastal Andhra and Rayalaseema regions in support of a united Andhra Pradesh.