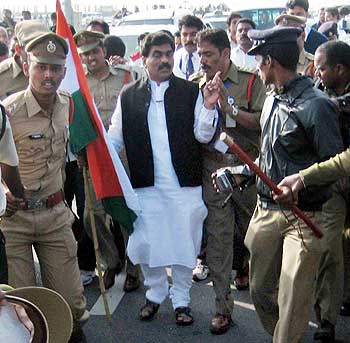 Protests continued in the Rayalaseema and coastal regions of Andhra Pradesh for the fourth day on Monday against bifurcation of the state.

Tension prevailed in Vijayawada and elsewhere in Krishna district after the arrest of Lok Sabha member L Rajagopal in Hyderabad. His followers took out rallies and staged sit-in across the city. Some of them attempted suicide by pouring kerosene near the Congress's office in the city, but police intervened and took three of them into custody.

Hundreds of passengers were stranded at the bus complex in the city and elsewhere in the district. Several leaders called on Telugu Desam Party MLA D Umamaheswara Rao and others who are on fast-unto-death in Vijayawada.

Two of the four students of Andhra University in Visakhapatnam, who have been holding fast-unto-death for the last three days, were admitted to a hospital after they fell ill, city police commissioner N Sambasiva Rao told PTI.

The situation in the port city is peaceful as no major incident of violence has been reported, he said. The protesters have been holding road blockades, rallies and other forms of protests in coastal Andhra and Rayalaseema regions.

The students of Sri Krishnadevaraya University held a half-naked protest in Anantapur. District Superintendent of Police M K Singh told PTI that rallies and other forms of protest have been held all over the district. The situation in the district is peaceful, he said. Demonstrations by students and others were also organised in districts like Kadapa, Kurnool and Chittoor in the Rayalaseema region.

Captain who died in AI plane crash was ex-IAF

'Pained by the plane accident in Kozhikode'

Coverage: The agitation for Telangana

'225 MLAs will vote against Telangana'