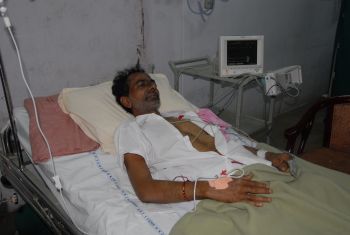 In view of the impending threat given by students to siege the Andhra Pradesh state legislative assembly to press their demand for separate Telangana, 15 additional companies of the Central Reserve Paramilitary Force and the Rapid Action Force reached Hyderabad on Tuesday.

At least 1 lakh students are expected to attack the assembly on Thursday. The Joint Action Committee of the Osmania University has called a 'Chalo Assembly' programme asking the assembly to pass a resolution to urge the Centre towards the formation of Telangana state.

The state is gearing up for the siege in all possible ways.

After a review meeting of officials with Chief Minister K Rosaiah, Inspector General of Police A R Anuradha said prohibitory orders were being imposed in the entire Telangana region from Wednesday.

All entry points to the city are being sealed and all vehicles are being checked, she added.

"The government is monitoring the situation very closely and will deal with any attempt to break the law sternly," she said.

She appealed to people of other parts of the state to not come to Hyderabad on Thursday, as they will have to face hardships on account of security and prohibitory orders.

Paramilitary forces and policemen, who have been called in from across the state, are being deployed at all sensitive places and at state's entry points to prevent large-scale mobilisation of students from other parts of Telangana into the city.

Roads leading to the assembly have been barricaded.

The government has also ordered the closure of all hostels at the Osmania University and has instructed the students to vacate the premises by Tuesday night. The mess has also been closed so that the students are forced to vacate.

With the health of Telangana Rashtra Samithi president K Chandrashekhara Rao deteriorating after 10 days into the fast, TRS supporters have already raised the tension in the state.

Rao's doctors have warned him that if he did not end his fast immediately, complications may begin.

The latest medical bulletin of Nizam's Institute of Medical Sciences said the protein and albumin levels in Rao's blood was decreasing and that he was gradually getting weaker.

The bulletin also said that Rao was not cooperating with the doctors for timely treatment and in conducting the mandatory health tests.

The medical bulletin also added that artificially propping up Rao's health through IV fluids and medication would have repercussions in the long run.

Mohammed Siddique in Hyderabad
© Copyright 2020 PTI. All rights reserved. Republication or redistribution of PTI content, including by framing or similar means, is expressly prohibited without the prior written consent.