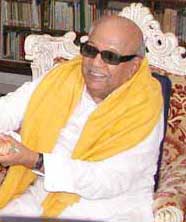 Setting the cat among the pigeons, Dravida Munnetra Kazhagam chief M Karunanidhi hinted that he was retiring to 'work among the oppressed people' from 2010. The Tamil Nadu Assembly elections are due in 2011.

He said he would like to retire from politics after completing some of his "important ambitions, including successful conduct of the International Classical Tamil Conference in June next year".

"Brushing aside politics and power, I will come closer to the people," he said at a rally of the Arundatiyar community in Chennai on Sunday.

The rally was held by Arundati Makkal Katchi to thank him for providing exclusive three per cent reservation for the Arundatiyars. Eighty-five-year-old Karunanidhi has already made his son M K Stalin the deputy chief minister and he is certain to be the claimant to the top job in Tamil Nadu.

However, the DMK is divided into factions headed by various branches of the Karunanidhi family and this announcement is bound to push the various groups in the DMK to take up their positions.

The man who has spent 50 years in politics, said his remaining ambitions include completion of the under-construction new secretariat building and the establishment of Anna Centenary Library at Kotturpuram.

The International Classical Tamil Conference is scheduled to be held in Coimbatore next year, after which Karunanidhi said he would "come closer to the people and make myself one among you".

"I will spend the rest of my life dedicated towards working for the betterment of the poor and underprivileged. To the question that whether I should do this from the seat of power -- let me tell you -- once my remaining ambitions -- the new secretariat and the Tamil conference -- are achieved, I will come closer to you," he said.

Karunanidhi's health has been a concern in recent times as he had to undergo a major spine surgery earlier this year, which had rendered him indisposed for some time.

The question is whether his statement means he will step down from the chief ministership after the Tamil conference, paving the way for early Assembly elections, or will anoint his heir  both to the party and the government  during the tenure of this government.

His announcement will alter equations among the allies as well  at this point, the DMK's strongest ally and the party which is shoring up the government in Tamil Nadu is the Congress.

There is a strong group in the Congress that favours making an independent bid for power in the state.

Other parties  like the Left parties which, while being traditional supporters of the DMK, broke away from it on the issue of the Indo-US Civil Nuclear Agreement and the DMK's support to the Centre  will also begin to weigh their options.

After a brief honeymoon with Jayalalitha's All India Anna Dravida Munnetra Kazagham (AIADMK), the Left has broken free of her and is now a free agent.