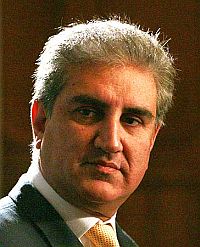 Pakistan on Saturday said India appears to be "hesitating" over the resumption of the stalled peace process due to its "internal political situation" and insisted that dialogue is the only way forward for the two countries.

Pakistan Foreign Minister Shah Mahmood Qureshi, in a wide-ranging interview to a TV news channel, also ruled out the possibility of Pakistan acting on advice from the West to shift troops from the Indian border to focus on the campaign against militancy along the Afghan frontier, terming it as Islamabad's "internal decision."

Besides, he dispelled the impression that there is a deadlock between India and Pakistan over New Delhi's call for Islamabad to take action against outlawed Jamaat-ud-Dawaah chief Hafiz Mohammad Saeed for his links to the Mumbai attacks and demanded "legally tenable evidence" against the Lashkar-e-Tayiba founder.

On resumption of the bilateral peace process, Qureshi said, "At this point, if anyone is seen to be hesitating, it is India. Their internal political situation is putting a lot of pressure on them. As far as Pakistan is concerned, it is ready to engage."

"We are not worried...We can sit and put across our views and we are ready to listen to their viewpoint," Qureshi said in response to a question about the current status of relations between the two countries.

Replying to another question, he ruled out the possibility of Pakistan acting on advice from Western countries to shift troops from the Indian border to focus on the campaign against militancy along the Afghan frontier.

"This is our internal decision. We have our own priorities. Our military leadership understands better what should be our strategy and where, when and how much we should focus on things. We do not need advice from outside on this issue," he said.

On New Delhi's call for Islamabad to take action against Saeed, Qureshi said that there was no deadlock between India and Pakistan on the issue. "No, I will not call it a deadlock. If they are interested in Hafiz Saeed, we have already told them that if they have legally tenable evidence, then it should be shared with us," he said.

Noting that Pakistan's courts are independent, Qureshi said authorities will use such evidence "to prepare a case that can withstand the test of scrutiny."

"At the same time, the world believes the composite dialogue is a good process and the revival of that process, in the long run, will be in India's interest though it may not be perceived as such by them today," he said.

Qureshi said he continued to be optimistic about improving ties with India despite the presence of many difficulties. "The matter is not easy. I will not be under any wrong impression...But I am still optimistic, I think we have to engage them and normalise relations," he said.

"Many difficulties are there and I don't deny them. We have our viewpoint and while sticking to this, we are prepared to take things forward." India put on hold the composite dialogue in the wake of the Mumbai attacks, which were blamed on the Pakistan-based Lashker-e-Tayiba.

New Delhi has linked the resumption of talks to Islamabad taking action against the perpetrators of the terrorist assault.