'Jayalalithaa's intelligence is clouded by emotions' 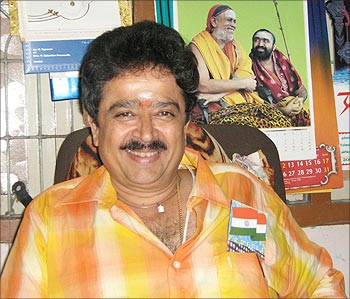 Sattanathapuram Venkataraman Shekher, a Member of the Legislative Assembly from the Mylapore constituency in Tamil Nadu, has been in the news recently. Though he won the election on an All India Anna Dravida Munnetra Kazhagam ticket, he was expelled from the AIADMK for 'anti-party activities'.

On a hectic Sunday morning -- he visits at least nine temples -- actor-playwright S Ve Shekher talks to A Ganesh Nadar on politics, expulsion and his plans ahead.

I entered politics in 1989 when I contested the assembly polls as an Independent. I got more votes then (V R ) Nedunchezhian (then Tamil Nadu's finance minister). I was a Bharatiya Janata Party sympathiser till 2004.

In 2004, I joined the AIADMK because I liked the party's leadership. I spoke to Jayalalithaa and told her I liked her party and her leadership skills. I accepted her as my sole leader. But later on, others started interfering, leading to confusion among party workers. Whom should I follow, I wondered.

Since I have been expelled, I don't want to talk more about the party.

But I wasn't corrupt. If I was, probably I would still be in the party. The issue was about corruption. It was a question of loyalty and honesty. Where loyalty is concerned, you can be loyal to only one person.

Lord Venkatachalapathy says, 'Be loyal to only me.' When you have to be loyal to too many people, then it gets murkier. The human brain cannot comprehend many loyalties.

It is entirely their loss. I have not lost anything. From the very beginning there were problems. But it got aggravated after I became an MLA in 2006.

The AIADMK is not a party for all the people. It's a party meant for relatives and friends of a particular person close to the leader. It is meant only for those in that caste who are friendly or related to one person.

For an outsider like me, it was a different picture when I joined. Only when I entered the party, I felt the heat. For the outside world, Jayalalithaa is portrayed as the leader. In fact, the party operations are controlled by another person.

That person cannot even win municipal elections. That person is exploiting Amma's (that is how Jayalalithaa is known in party circles) affection to take control of the party. That person is very intelligent. It is Amma's blunder that she cannot see who the real person is.

No doubt, Jayalalithaa is very intelligent. But as far as that person is concerned, Amma's intelligence is clouded by emotions.

In Tamil Nadu, in the month of Aadi, it is all about shopping. If you buy one, you get one free. They expelled me from the party and set Thiruchendur MLA Anita Radhakrishnan free. We were not expelled together. Only the timing was the same.

One cannot compare the two. He is a very senior leader and a former minister. I was expecting this move for the 18 months now. I am sure it is different with him.

There is a funny angle as well. Everyone has been told that I am out of the party, expect the person who matters. They have not informed the speaker of the Tamil Nadu assembly that I have been expelled I am and will continue to function as an Independent MLA.

I met Narendra Modi once. After a month I called the Gujarat chief minister's office to wish him on his birthday. It was 3 pm and they told me he was in a meeting, but would convey my message to him. Around 7 pm I got a call. 'Shekharji, this is Narendra Modi. Thank you for your wishes.'

I told him, 'If all chief ministers were as accessible as you, forget 2020, India would become a superpower in 2010.'

Even President (A P J ) Kalam replies to every e-mail he gets. Only in Kodainadu, the 'person you are trying to reach will be out of the coverage area'. Accessibility is zero in the AIADMK.

I am not thinking of joining the Dravida Munnetra Kazhagam now. In Tamil Nadu, the forward community (he is a Brahmin) won't get any justice. Mayawati has initiated a new path of social engineering; and she has captured the Brahmin vote.

I want Chief Minister Karunanidhi to do the same thing. At least they should appoint a judge to study their plight. The forward community is the most backward, I would say.

The DMK is ideologically against Brahmins, but they never exhibit animosity. Most aides of Karunanidhi, (state Deputy Chief Minister M K) Stalin, and (Union Textiles Minister Dayanidhi) Maran are Brahmins. They respect Brahmins.

I have to study the DMK ideology before even thinking of joining the party. After joining, I cannot criticise their ideology. I am a believer in God, and the DMK is atheist in nature.

Though she is a Brahmin, Jayalalithaa has never done anything for Brahmins except throwing me out of the party.

There is no salvation or forgiveness for disrespect to the guru. That is why she could never win an election since 2004. God is great. He will be released from the case. You wait and see.

It is the first time in the world that such a big religious leader was arrested on a murder charge. It was a framed charge and he will come out of it. Karunanidhi would never do something like that. He may have made derogatory comments on the Ramayana and the Ram Sethu, but he will never do anything like this.

Honesty is bravery. I am honest. I expect the Padma Shri for my stage performances --I have performed 5,007 plays. I also hope that they nominate me to the Rajya Sabha as a representative of the film industry. I can represent both the film world and the common man. I am accessible to both.

Holy Man in a Controversy