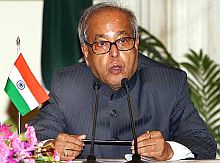 Finance Minister Pranab Mukherjee has said attempts were being made to vilify Pandit Jawaharlal Nehru in the wake of Jaswant Singh's book on Mohammad Ali Jinnah and said it was a malicious campaign to distort history for narrow partisan interests.

He also attacked attempts to make out that Shyama Prasad Mukherjee, the leader of the Hindu Mahasabha, the progenitor of the latter day Jana Sangh and BJP, and Jinnah had no role in Partition.

Mukherjee made sarcastic references to senior BJP leader L K Advani's controversial visit to Pakistan in 2005 and Jaswant Singh's book on Jinnah and said they should explain the psychology behind glorifying Jinnah.

"The BJP leaders should explain. When Advani will go to Pakistan, he will discover that Jinnah is secular.Jaswant Singh suddenly discovered that he was not responsible (for Partition). He wanted a united India. These are not historically correct," he told PTI in the first high-level reaction from Congress to Singh's book.

"This is mudslinging and vilification. An attempt is being made to vilify Jawaharlal Nehru by accusing him of being responsible for the Partition of India.

"This is a malicious campaign completely ignoring the facts pertaining to the Partition and an attempt to distort history for narrow partisan interest," Mukherjee said

S P Mukherjee was behind

. Referring to Singh's book and saffron leaders' attempts to blame Nehru and other Congress leaders for Partition, Mukherjee said, "How can they claim they (HMS leaders) had no role in Partition. The BJP leaders should not forget that the founder of Jana Sangh, S P Mukherjee was one of the main architects of Partition of India."

He said Mukherjee was then the president of HMS and he not only supported Partition of the country, but insisted on Partition of Bengal and Punjab on the basis of Hindu-Muslim and Hindu-Sikh-Muslim majority districts respectively in these two provinces.

"It is ironical that leaders of that party are trying to distort history and are eager to absolve Jinnah for his role in Partition of this country," he said.

The Minister said BJP owed an explanation to the people on what prompted their leaders to distort history and vilify Nehru, who was an architect of modern India.

"The contribution of this statesman (Nehru) in shaping the destiny of this country in its early years of independence does not require any certification from any political party, least of all BJP," he said.

Mukherjee said the greatness of a leader comes from his actions and the legacy he leaves behind.

"He left behind a strong, secular and democratic nation, which is today the largest parliamentary democracy in the world. He has his own place in history and no irresponsible comment could alter his place in history."

Mukherjee said his point was that Nehru's evaluation would be done by history.

"He has left behind a strong, vibrant, functional parliamentary democracy and a well laid-out Constitution which is regarded as the magna carta of the socio-economic transformation," he said.

The minister said all the effective institutions to support democracy like an independent election commission, free media, independent judiciary and all the institutional arrangements were made by Nehru. 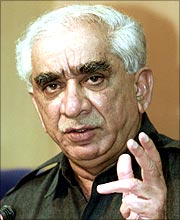 "So he has left a legacy of democracy, liberalism. In international politics, he has given the Non-Alignment Movement," he said.
Asked why Jinnah was being glorified periodically by BJP leaders, he said, "I am not going to analyse it, but they should not do it.

Every individual is free to express his opinion even in writing by writings books. But you cannot denigrate somebody which is not historically correct and factually acceptable."

To a query whether history was being made to suit domestic political ends, he said, after all these types of observations, Advani ultimately had to back out or at least he left them aside. He did not go further but he had to face criticism in his party, he said.

Mukherjee said it was a well-known fact that Jinnah's two-nation theory, vigorously propagated by Muslim League with the support of the then ruling colonial power, ultimately resulted in Partition of India and creation of two countries - India and Pakistan.

"From the late 30s, Jinnah and Muslim League persistently pressurized the British government to concede to their demands to establish Pakistan," he said.

The minister said after the General Elections to Provincial Assemblies in 1946 when the Muslim League got absolute majority in undivided Bengal and Sindh Legislative Assemblies and fell short of majority in Punjab, the Muslim League stepped up their demand for Pakistan and declared that August 16 be observed as 'Direct Action Day' all over India for establishment of Pakistan.

On August 16, fierce communal riots broke out in Kolkata and continued for several days.

This triggered off the worst communal riots in Bihar, Noakhali (Bengal), Punjab and many other parts of the country. In that context, the Cabinet Mission appointed by the then British government along with Lord Mountbatten, Governor General of India, presented the plan of Partition of India into two countries. This was ultimately accepted by the political leadership including Congress, Muslim League, HMS and others, he said.

Buy books on the Partition of India at the Rediff Bookshop
Source: PTI© Copyright 2021 PTI. All rights reserved. Republication or redistribution of PTI content, including by framing or similar means, is expressly prohibited without the prior written consent.
SHARE THIS STORY
Print this article