PM: India has stake in stability of South Asian neighbours 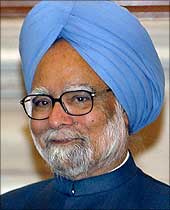 Contending that India had a stake in the prosperity and stability of all its neighbours, Prime Minister Manmohan Singh  said on Tuesday that the country would strive to engage them constructively and resolve differences through peaceful means and negotiations. Addressing a conclave of 112 Indian envoys in New Delhi, he also raised pitch for the fight against terrorism, saying India has been a victim of the menace which should be "tackled with full vigour and resolve" to ensure continuing advancement of India.

"India has a stake in the prosperity and stability of all our South Asian neighbours. We should strive to engage our neighbours constructively and resolve differences through peaceful means and negotiations," said Singh without referring to any country in particular.

Outlining his government's priorities, Singh spoke about the integral link of foreign policy with domestic policies particularly economic policy. He told the heads of Indian missions that the country's foreign policy should be aimed at addressing the challenges of mass poverty, ignorance and disease in the country, which are the "primary concern of the Indian state and polity".

Singh stressed the need for sustaining capital inflows, taking advantage of rapid scientific and technological developments in the world to enable India to leap frog in development and ensure that the country's growth is not constrained by scarcity of natural resources. All these required active engagement by India in all multilateral fora, and in the shaping of the world order, whether in the field of trade, international finance or the international economy, he said.

Insularity was not an option, Singh said, adding that India should play a role in the international arena in a manner that makes a positive contribution in finding solutions to major global challenges, whether in the field of trade or climate change.

Referring to the recession, the prime minister said despite the global slowdown, the Indian economy was still the second fastest growing in the world. He, however, said all-out efforts were needed to put the economy back on a sustained high rate of growth if the challenges of poverty and disease were to be effectively addressed.