A first for Arjun Singh: dropped from campaigners' list for MP by-polls 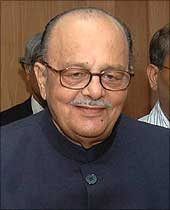 For the first time in many years, senior Congress leader and former Union minister Arjun Singh's name does not figure in the party's list of star campaigners for the September 10 by-elections to two assembly seats in Madhya Pradesh.

Singh's name may have been dropped on health grounds from the list that was submitted to the Madhya Pradesh Chief Election Officer on Monday.

Congress spokesman Arvind Malaviya said there was no need to read anything into the exclusion of Singh's name from the list, as it may have been done only on health grounds.

It was not necessary that all the star campaigners would visit the two assembly constituencies where by-elections would be held on September 10, Malaviya said.

He, however, added that if a person's name was listed as a star campaigner then the expenses incurred on his campaigning in a constituency are not listed along with the expenses of the candidate.